Our upcoming show MEMORY HOUSE features well-known television, film, and stage actress Debra Jo Rupp as Maggie alongside newcomer Caitlyn Griffin as Katia, Maggie’s adopted daughter. While Ms. Rupp is a local favorite and a well known name in the Berkshires, newcomer Caitlyn is a fresh face in the community.

Caitlyn, a 21 year old senior at UMass, has been acting for some time now, and portrayal of Katia in MEMORY HOUSE will be her first professional role. We sat down with Caitlyn to learn a bit more about this rising actress as she prepares for her professional debut. 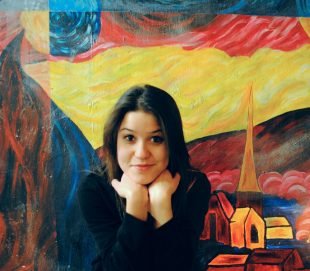 Where are you from?

Though towns have changed every once and a while, I have always lived in central Massachusetts. I currently live in Spencer, MA.

What year are you in at UMass and what is your major?

I am going into my senior year this coming fall. I am a double major in Theatre and English, with a Concentration in Creative Writing and a minor in Sociology.

Does the role seem natural for you to play, because you are a college student and the application process was rather recent for you?

As a current college student, especially one who is about to undergo the application process for graduate school, the particular chaos Katia goes through is something I can certainly relate to. I felt the existential-dread when applying for undergrad, and I’m starting to feel that all too familiar feeling again as I start drafting new essays, applications, and really my future plans in general! I think the “late teens into late twenties” is a time where everyone questions who they are, and what their place is in the world. Katia’s struggle is one I myself have tried to overcome plenty of times before, as I’m sure nearly all of us have at some point or another.

What was your first theatre experience?

My first theatre experience was when I was nine years old, during a small town community theatre camp for kids age 9-14. I was a feisty mouse in our rendition of Hercules.

When did you first know you wanted to act?

As most kids in elementary school do, I was always trying to find my niche. I tried tap dance, ballet, gymnastics, soccer, and played around with the ideas of starting karate or violin lessons. But when my parents and I read about a local theatre camp for kids during the summer, I decided to give it a try. From there, the rest is history – the theatre bug bit me, and has never ceased to let go!

What is the most challenging part of the role for you?

Though I have struggled at times with who I am and who I’d like to be, Katia’s journey of self is a bit more complex, and dare I say, a little more tragic than my own life. She has come from incredibly upsetting circumstances – parents who wanted to raise her, but simply could not afford to do so. Her surroundings left something to be desired, and she, at a very young and impressionable age, was completely up-rooted from the only place she knew to call home. As Cait the actress, it can be hard to truly convey the rawness of Katia’s ever-shifting rage, confusion, and utter despair – but with revisiting the text, Sheila’s direction, and bouncing off of Debra Jo, I’m really able to ground myself in what Katia’s truth should be.

I think Maggie is an immensely selfless, but still incredibly strong woman. Though she may be in a bit of a rut alongside her daughter, she continues to move to the beat of her own drum, letting us know she’ll no doubt come out of this crisis better than ever. My mom is very much like Maggie, in the sense that she’s the strongest woman I know. What’s more is she is always pushing me to take chances and do my best – things Maggie believes Katia is entirely capable of as well.

Who should see this play?

Anyone and everyone! This play has things in it we can all relate to – moments of love, family, truth, change, self-reflection, and even self-loathing. Beautiful, and seemingly very personal, storytelling is portrayed through the lives of a mother and daughter – but it is a story told in such a way that will touch anyone’s heart.