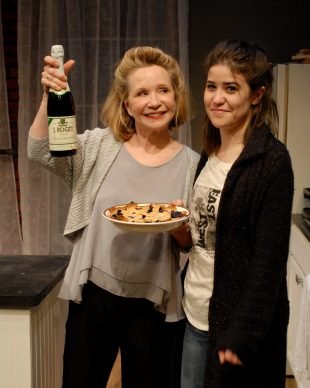 Debra Jo Rupp, Caitlyn Griffin and Director Sheila Siragusa recently sat down to discuss Memory House and how much fun they are having on this production.

Read the interview below, which appeared on MassLive.

“Memory House” takes place in one night, New Year’s Eve, in a New York apartment as Katia tries to finish a college essay – due by midnight – while Maggie, her mother, attempts to make a blueberry pie. As the deadline nears, issues about Katia’s adoption from Russia, her parents divorce and the fear of leaving home come up as Maggie deals with her own personal struggles.

Stevens, who is in his final season as Artistic Director at Chester, said “When I read “Memory House,” I immediately thought of Sheila as the director and Debra Jo to play Maggie. Debra Jo has the ability to delivery the wit and comedy of the role and still bring the freight in the more emotional scenes. Recently, Sheila has been doing more classically oriented material for us (“An Iliad” and “Crime and Punishment”), but prior to that she had real success with intense, relationship driven pieces like “Blackbird.” Sheila suggested Caitlyn to me, and after seeing a lot of young, professional actresses in New York, we decided that we would go with an actress closer in age to the role and one who had not yet attained a self-conscious gloss. The result has been a wonderful chemistry in the rehearsal room!”

“It’s been really fun for us,” says Siragusa about working with Rupp and Griffin, who happens to be one of her theatre students at UMass and who is making her her professional debut as Katia, the adopted daughter from Russia.

“These two have real chemistry,” says Siragusa of Rupp and Griffin.

Griffin sees certain qualities that Maggie and her own mother share, which have made it easier for her to play this role. At various moments in the play she is reminded of her relationship with her own mother, offering this example of a typical exchange, “I am like, mom, the world is a terrible place and she says, ‘You just need to relax’.”

Indeed. Rupp says the play doesn’t “dance around the fact that the world is a messy and imperfect place.”

And yet, points out Siragusa, “the play is very, very funny. There is so much humor in it.”

“I like Maggie’s struggle in this — it’s quite universal. I like telling stories like that,” says Rupp, adding that an actor is a storyteller. Both characters in this story, Rupp says, have something that needs to be finished and they each have to figure out a way to do it.

Each has her “thing” to do.

“Do the thing,” says Rupp, paraphrasing a line from the play that seems to have become an anthem for the three women. Write the thing because you can,” she says echoing Maggie’s words to her daughter.

It’s also about how you live in this world – how you keep going on,” Rupp says.

“Yes. Without sinking,” adds Siragusa. And with love you can step forward and do the thing.”

The women are quick to point out that Memory House is not a play just for mothers and daughters. It is a family drama and the themes of identity, divorce, the anxiety surrounding getting into college and leaving home are universal.

Although Sirgusa says the play is so much about what good mothering is, she says that isn’t what she wants to tell people.

Memory House, she says, “is a play about two people who love each other madly, helping each other move forward in life.”

Mothers pay half price with the purchase of a full price ticket for a daughter for Friday and Saturday 8 p.m. performances.

A special Girls Just Wanna Have Fun event on Sunday, August 9 includes a ticket to the 2 p.m. matinee followed by dinner with homemade blueberry pie for dessert at Roscoe’s in Chester. For tickets to this event only, call 413-531-3439.