Chester Theatre Company was founded in 1990 by Vincent Dowling, former Artistic Director of Dublin’s famed Abbey Theatre. Over the years, The Miniature Theatre of Chester, as it was then known, grew from “little miracle of the Berkshires” (The Berkshire Eagle) to a company that “has produced a record that can rival the best the area has to offer.” (The Boston Globe)

Under the leadership of Artistic Director Byam Stevens, CTC earned a reputation for producing the best in contemporary theatre, consistently winning top honors with critics and audiences. But, the success of our productions is not strictly local —  many CTC productions, including: Pride@Prejudice (2011), Last Train to Nibroc (2010), The Dishwashers (2008), The Bully Pulpit (2007), Two Rooms (2006), Duet For One (2006), The Retreat from Moscow (2005), Tea for Three (2004), Valley Song (2001), The Double Bass (2000) and A Moon For the Misbegotten (2000), have gone on to Off Broadway, regional, national, and international tours.

In fact, CTC has transferred 17 productions to other venues in the last 15 years, a record any theatre company would be proud of. Truly, CTC “delivers plays that grip the soul and fire the imagination.” (The Valley Advocate)

In 2015, Daniel Elihu Kramer was appointed as the new Producing Artistic Director of Chester Theatre Company, and in 2016 CTC produced its first season under his leadership, including the world premiere of his play My Jane, and a co-production with Israeli Stage of Oh God by Amitav Gosh.

In 2018, The New Yorker published a story on CTC, hailing its programming of “some of the most adventurous theatre in the area.

As of the fall of 2022, James Barry and Tara Franklin, both well-known for their work on the Town Hall stage and the Berkshire region, have been named Co-Producing Artistic Directors. We are excited for the energy and vision that they bring to the theatre, given their long and wonderful histories here.

In his final column as theatre critic for The Valley Advocate, Chris Rohmann called CTC “the most literate and stimulating small-scale summer theatre.” 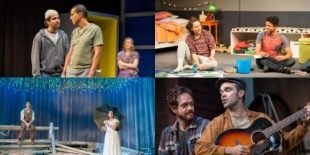 Over the years, CTC has run additional educational programs:

The Gateway Playwriting Project and The Camp Shepard Project were after-school playwrighting programs that teams middle school playwrights with professional actors, directors and designers to create new works performed before the general public. This innovative program received the Champions of Arts Education Award from the Massachusetts Alliance of Arts Educators, and was named a Creative Teaching Partner by the Massachusetts Cultural Council.