Greetings from London, where we’re underway with what we think might be our largest group ever on Chester Theatre Company’s London Theatre Tour!

We arrived on Sunday, and settled into our rooms in the lovely Royal Lancaster London–directly across from Hyde Park, and around the corner from the Lancaster Gate stop on the Central Line. The area around the hotel includes not only Hyde Park and Kensington Gardens, but also a number of lovely cobbled mews with beautifully restored homes. 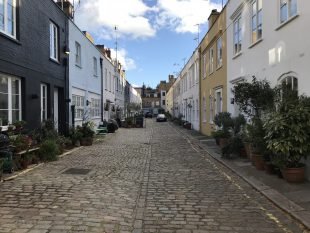 The day was windy but sunny, and some of our travelers began to tour the city, going to museums and parks. One group went on a tour of street art led by a terrific organization called London Walks.

Sunday evening we gathered for a wonderful dinner together. We had the chance to meet our fellow travelers, and to share what brought each of us to join this trip. We have a terrific mix of return and new tour-goers, and we look forward to hearing the perspectives of both groups.

On Monday morning, we gathered in the upstairs room of The Swan pub, where Matt Wolf–London theatre critic for the New York Times–introduced us to the theatres, plays, and artists we’ll be seeing this week. As ever, Matt offered both a deep and a broad understanding of the London theatre scene. Matt is actually an American who came to London around thirty-five years ago, and just never left. He has become an integral part of the theatre scene here, and one of its most vital interpreters for American audiences. His talk left us excited for what our week holds.

Monday evening we headed to the West End to see All About Eve, Ivo van Hove’s revisiting of the classic movie, starring Gillian Anderson and Lily James. The production makes extensive use of video to alter our perspective on events in the play–sometimes taking us places we couldn’t normally go, and sometimes offering us new views on scenes already in front of us. 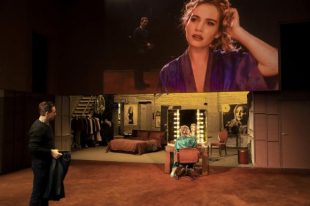 Lily James in All About Eve.

Tuesday morning we had our first conversation–one of the best parts of these trips. I (this is Daniel writing) was struck all over again by the thoughtfulness, openness, and intelligence of our travelers. We had a wonderfully varied and sophisticated conversation about a range of subjects: the uses of video and its impact on how we saw the live actors on stage, the role of women and how they saw themselves in the play (or how male writers imagine them seeing themselves), acting and what leads people to acting, etc.

On that last topic, we had the great advantage of having our new Associate Artistic Director Tara Franklin with us, along with her husband James Barry. They shared their perspectives as professional actors about what led them to this work in the first place, and what they seek from the experience of acting.

Tuesday is a rainy day here (now there’s a surprise in London), and many museum visits were planned. This evening, we’ll be headed back to the West End to see Stephen Sondheim’s musical Company, re-imagined by director Marianne Elliott as a story about a woman (played by Rosalie Craig), rather than a man, whose friends want to know when she will get married. Much more to come on that and more in the next blog entry!