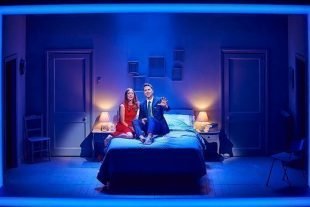 Company on the West End.

Company was a marvel. Our discussion of this production traveled across how its reimagining with a woman at the center revitalized the piece, and how well director and Marianne Elliott and designer Bunny Christie (who also collaborated on The Curious Incident of the Dog in the Nighttime) moved us through the world(s) of the play. And of course, Patti LuPone’s return to musical theatre! Keep an eye out for this production if its rumored New York transfer happens. It closes in London at the end of the month. (Our return travelers from last year had seen lead Rosalie Craig in The Ferryman here in London. We were impressed by her very different work in each show.)

On Wednesday, we went to the newly renamed Kiln Theatre (formerly The Tricycle) to see the English language premiere of Florian Zeller’s The Son in a translation by Christopher Hampton. This was a remarkable play and production, though some of our travelers found it painful to watch the parents flailing (and failing?) as they tried to figure out how to help their struggling teenage son. (This production featured Laurie Kinaston–also from The Ferryman, as well as John Light from last year’s Mary Stuart.) Our Thursday talkback gained from the expertise of some of our travelers, including one whose career has been working with just this population. We also enjoyed the chance to go to the Kiln, which will certainly stay on our list for next year. 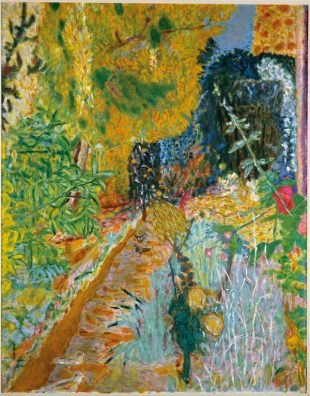 In the midst of all this theatre-going, travelers continued to explore London. Many ended up at the Tate Modern on Thursday, where a variety of exhibits drew attention, including an extensive collection of Pierre Bonnard, focused on his late use of color. Others ended up at the Tate Britain, where a vivid exhibit of the work of British photographer Don McCullin addressed the twentieth century in both war and peace.

We crossed the Thames both Thursday and Friday, for Alys, Always at the Bridge Theatre and Tartuffe at the National. Both productions had their pleasures, and perhaps their limitations as well. Tartuffe in particular had fascinating political perspective–with Tartuffe bringing a brigade of the homeless into Orgon’s household–though we weren’t always certain the play and the politics strengthened each other.

Many of our travelers added other productions. We heard particularly great things about the new production of Harold Pinter’s Betrayal on the West End (at the Harold Pinter theatre, in fact), and Stephen Rhea in Cypress Avenue at the Royal Court. 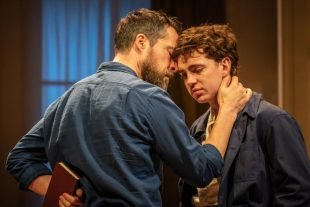 The Son at the Kiln Theatre.

As ever, the week went by more quickly than we wanted! Still, I (this is Daniel talking) was struck perhaps most of all by the remarkable conversations we had. Traveling with such thoughtful, curious, impressive, and open-minded people–and getting to expand our experience of the plays in conversation with each other–continues to be the highlight of the trip. We left excited to share what we’d seen, to regather in Chester this summer, and to think about future trips–to Chicago this fall, to London next year, and beyond!