We’ve been having a busy and wonderful time here in Washington. The weather continues to be wonderful, encouraging everyone to enjoy the city. We gathered Friday morning for a discussion of the Studio Theatre production of Lucy Prebble’s play The Effect. The play raised fascinating questions on a range of topics, with a central focus on how we identify our true selves and instincts, both when we feel we are in love and in other situations as well. 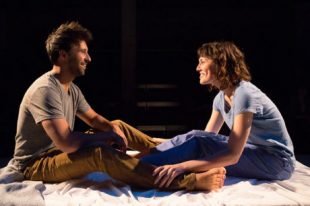 Rafi Silver and Katie Kleiger in The Effect

The central characters have signed up for an in-patient drug trial. When they begin to be attracted to each other, they can’t be sure whether they can trust their feelings, or whether their feelings may be an effect of the drug being tested. The central performers gave impressively detailed and lively performances.

Our discussion ranged across the themes and means of the production (which included projections of the scientific data and testing), the secondary plot concerning two doctor-scientists, and some questions about the direction the play takes in its second act.

After our Talkback, some tour-goers visited the National Portrait Gallery, and some went to the Capitol building for a tour, and an opportunity to see Congress at work. 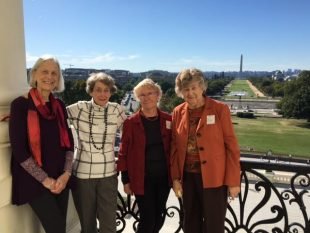 In the evening, we traveled north to Bethesda to see the world premiere of Sarah Gancher’s I’ll Get You Back Again at Round House Theatre in Bethesda. The play is the story of a young woman–a struggling stand-up comic–who travels to California to reunite her late father’s 1960’s psychedelic rock band. The production mixed live music, an enormous revolving set, massive projections, multiple actors to portray characters at different ages, and the Three Stooges.

If all of that has you overwhelmed, and perhaps confused, we had to admit at Saturday morning’s Talkback that we felt that way, too. There were occasional glimpses of the lovely play this could have been, but our tour-goers generally agreed that those moments were obscured by too many of the other elements.

Following the Talkback, we headed out into yet another beautiful day, with plans to reconvene in the Capitol Hill area at the Folger Shakespeare Library’s theatre for a matinee of Shakespeare’s Antony and Cleopatra.