We began our second full day in Washington, DC with a discussion of Native Gardens, which we had seen the night before at Arena Stage. The show raised a range of issues about everything from neighbors and property lines to ethnicity, generations, and politics. Revolving around a property dispute between older residents and newcomers to the neighborhood, Karen Zacarías’s comedy is set in Washington, DC, and the audience clearly enjoyed the range of local references. 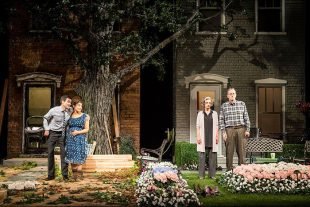 The set and cast of Native Gardens

The set of the play was a remarkably detailed rendering of the two properties and their back yards, and put all of us in the mood for what followed.

Many in our group found the comedy enjoyable, and at the same time were uncertain whether the play delved deeply enough into, or took sufficient responsibility for, the issues it brought up. We had a terrific conversation about the mechanics of farce: how is it set up, how does its machinery function, how does it resolve. Some of our travelers wondered how much weight a farce can be asked to carry.

In the afternoon, we all had passes to visit the new National Museum of African American History and Culture, the newest addition to the Smithsonian Museums. Going through the museum, you begin deep below, with a deeply affecting–and deeply researched–journey through the growth of the American slave trade. You then travel gradually up, journeying through African American history through to the present day. The journey is powerful in many ways–often upsetting, often inspiring. Some of our travelers observed ways in which we seem in the present moment to be traveling backwards rather than forwards. 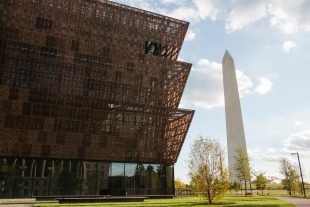 The museum makes clear that the entire project of the United States and the African American experience are not only intertwined, but one. On upper floors, there is a focus on many aspects of African American culture. A number of our travelers spent three or four hours in the museum, and it is an experience we will remember.

In the evening, we met at Studio Theatre in the Logan Circle neighborhood–a short walk from the Topaz Hotel where we are staying. We were there to see The Effect by Lucy Prebble, a relatively young British playwright whose play Enron was on Broadway a few years ago.