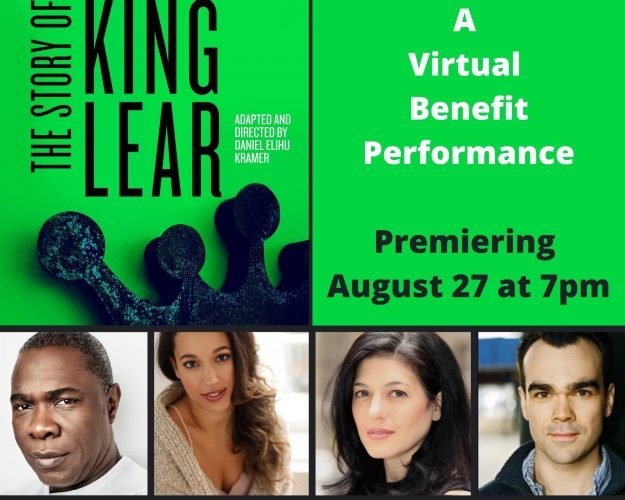 We are thrilled to bring you our first virtual performance,The Story of King Lear, a 50-minute telling of the Shakespeare classic adapted and directed by CTC Producing Artistic Director Daniel Elihu Kramer. The show will air at 7:00pm (eastern) on Thursday, August 27, and will be available for viewing through Sunday, August 30. (Look for updates here on how and where to watch.)

We have assembled a stellar cast for our first foray into this medium. Stage, film and television veteran Michael Potts takes on the title role as Lear. Known to TV audiences for his arc as Brother Mouzone in the celebrated series The Wire, Potts is also in the upcoming film version of August Wilson’s Ma Rainey’s Black Bottom starring Viola Davis. Broadway audiences will recall him from August Wilson’s Jitney, and musicals The Prom, Book of Mormon, and Grey Gardens. This marks his first appearance with CTC.
Shelley Fort, who starred in CTC’s 2016 production of The Mountaintop, returns to the CTC “stage” for her second appearance with the company. Fort has also appeared in productions at Trinity Repertory Theatre, La Mama, The Bushwick Starr and others. Most recently, she was in the Broadway National Tour of The Play That Goes Wrong. She’s a graduate of Kenyon College and Brown/Trinity Rep.
Berkshire Theatre Critics Association Award-winners Tara Franklin (CTC’s Associate Artistic Director and known for her work in On the Exhale, Bar Mitzvah Boy and Sister Play), and James Barry (CTC’s The Aliens, The Night Alive, and Sister Play) also star.
The Story of King Lear features the actors playing multiple roles, achieved through a playful take on the virtual platform.
“We have been staying engaged with our audience through a range of activities,” said Daniel. “Now, it’s time to make work for you. We are providing this performance free of charge, and we are relying on the support of our community so that we can be there with you through this time, and when we can gather in person again. King Lear speaks to our moment with remarkable power,” he continued. “In difficult times, we turn for sustenance to stories that speak to our shared experience. Here at Chester Theatre Company we are bringing that vital act of story-telling to virtual space, where we can still gather in community.”
Patrons who wish to support the event can make a donation by clicking the link here. Donors who make a gift of $100 or more to this event will receive a special invitation to a virtual post-show party with Daniel and members of the cast immediately following the initial broadcast. The invitation will include a recipe for a signature cocktail devised by Daniel so that participants who wish to can toast the event together.
The Story of King Lear is generously underwritten by Richard and Carol Seltzer.