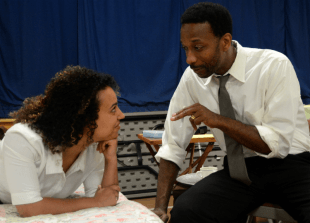 Shelley Fort and Jordan Mahome in The Mountaintop

The Mountaintop comes to the foothills of the Berkshires when Katori
Hall’s award-winning play opens at Chester Theatre Company on Thursday, August 18th at 8:00 p.m. A bold re-imagining of the last night in the life of Dr. Martin Luther King, Jr., The Mountaintop runs through August 28 at the historic Chester Town Hall at 15 Middlefield Road in Chester, MA.

Set entirely in Room 306 of the Lorraine Motel in Memphis on the night of April 3, 1968, The Mountaintop begins with a weary MLK alone in his room, wanting nothing more than a cigarette and a cup of coffee. What he gets instead is a visit from Camae, anirreverent motel maid who, in a heated dialogue that is by turns humorous, challenging, and deeply moving, forces Dr. King to confront his humanity, his legacy, and, ultimately, his mortality.

When The Mountaintop premiered in London, where it received the Olivier Award for
Best New Play, The Independent called it “an imaginative portrayal” of “a relationship
that is breathtaking, hilarious and heart-stopping in its exchanges and in its speedy
ability to reveal character and pull the audience into the ring.” Theater critic Charles
Spencer in The Daily Telegraph wrote, “It is a beautiful and startling piece, beginning
naturalistically before shifting gear into something magical, spiritual and touching.”

Playing Dr. King at CTC is Jordan Mahome, a New York-based actor, director and
educator. His NY credits include roles in Lynn Nottage’s By The Way and Meet Vera
Stark at 2econd Stage, The Play About My Dad by Boo Killebrew at 59E59, Tarell
McCraney’s The Brothers Size at The Public/McCarter, Thomas Bradshaw’s The
Bereaved at the Wild Project, Stephen Adly Guirgis’ Jesus Hopped the A Train at
Atlantic Theater Co., and Larry Kunofsky’s Your Boyfriend May Be Imaginary at
St.Marks Under. Other roles include Orlando in As You Like It, Antonio in Merchant of
Venice, Lysander in A Midsummer Night’s Dream, and Serebryakov in Chekov’s Uncle
Vanya. Onscreen, Jordan can be seen in the recurring role of Slim in Baz Luhrmann’s
Netflix series The Get Down; as Hightower in HBO’s mini-series The Night Of, with John
Turturro; and in the feature films Family Weekend with Kristin Chenoweth, LIFE with
Eddie Murphy, and Disney’s Max Keeble’s Big Move. He received his MFA from Yale.

Playing Camae is actor/writer Shelley Fort. Daughter of a poet and dancer/
choreographer, Shelley was born in Wilmington, NC., raised in Connecticut and
Nebraska, and trained throughout the world, including in St. Petersburg at the Russia
Theater Arts Academy, at the British American Drama Academy, and at the National
Theater Institute at the Eugene O’Neill Center in Waterford, CT. A workshop of her
play, Black Wings Bloom on an Ivory Sky will be presented this fall at the National Black
Theatre in New York. Shelley’s New York stage credits include playing Blossom
in Burnished By Grief at La MaMa, and MiMi in Harry and The Thief at Habitat Theater
Co. Regionally, Shelley has appeared as Mayme in Intimate Apparel and Belle in A
Christmas Carol at Trinity Rep, and Cressida in Troilus and Cressida with the Bread
Loaf Acting Ensemble. Her film and television work includes Josh Radnor’s Liberal Arts,
and Lucy Gillespie’s upcoming series Unicornland. Shelley is currently working with her
sister Claire on a screenplay about the marriage of their biracial parents, their pursuit of
the American dream, and the price one pays for happiness. Also a choreographer and
dancer, Shelley has performed at the American College Dance Association, Brown
University, and Kenyon College. She holds a BA from Kenyon College and an MFA from
Brown/Trinity Rep. More information can be found at www.shelleyfort.com.

Directing The Mountaintop is Colette Robert, a Los Angeles native currently living and
working in New York. Among her recent directing credits are ICONS/IDOLS at The New
Ohio/Ice Factory Festival; Flops, Failures, and Fiascos at The Civilians/Let Me Ascertain
You; Something Like Loneliness at Ensemble Studio Theatre; and When Last We Flew,
Diversionary Theatre, FringeNYC, GLAAD Media Award. Colette is a member of
Ensemble Studio Theatre and co-facilitator of the New Georges Jam, and an alumnus
of Lincoln Center Directors Lab and The Civilians R&D Group. She is a 2015-2016
Audrey Resident at New Georges, a 2016 Mabou Mines Resident Artist, and was the
Public Theater’s 2009 Van Lier Directing Fellow. She has developed new work with
EST/Youngblood, Atlantic Theatre Company, The Old Vic, Ma-Yi, Naked Angels,
Vineyard Arts Project, NYTW, Classical Theatre of Harlem, and the Sundance Theatre
Lab. Colette received her M.A. from the Royal Academy of Dramatic Art/King’s College
in London, and a B.A. from Yale University. Follow her at www.coletterobert.com

Playwright Katori Hall won the 2010 Olivier Award for Best New Play for The
Mountaintop, which also earned nominations for Whatsonstage Awards and the Evening
Standard award for Most Promising Playwright. A native of Memphis, TN, Hall’s other
plays include Hurt Village (2011 Susan Smith Blackburn Prize, Signature
Theatre), Children of Killers (National Theatre, UK and Castillo Theatre, NYC), Hoodoo
Love (Cherry Lane Theatre), Remembrance (Women’s Project), Saturday Night/Sunday
Morning, WHADDABLOODCLOT!!! (Williamstown Theatre Festival), Our Lady of Kibeho
(Signature Theatre) and Pussy Valley (Mixed Blood). Her awards include the Lark Play
Development Center Playwrights of New York (PoNY) Fellowship, the ARENA Stage
American Voices New Play Residency, the Kate Neal Kinley Fellowship, two Lecomte
du Nouy Prizes from Lincoln Center, the Fellowship of Southern Writers Bryan Family
Award in Drama, a NYFA Fellowship, the Lorraine Hansberry Playwriting Award, the
Columbia University John Jay Award for Distinguished Professional Achievement, the
Otto Rene Castillo Award for Political Theatre, and the Otis Guernsey New Voices
Playwriting Award. Hall’s journalism has appeared in The New York Times, The Boston
Globe, UK’s The Guardian, Essence and The Commercial Appeal, including contributing
reporting for Newsweek. The Mountaintop and Katori Hall: Plays One are published by
Methuen Drama. Hall is an alumna of the Lark Playwrights’ Workshop, where she
developed The Mountaintop and Our Lady of Kibeho, and a graduate of Columbia
University, the A.R.T. at Harvard University, and the Juilliard School. She is a proud
member of the Ron Brown Scholar Program, the Coca-Cola Scholar Program, the
Dramatists Guild, Writers Guild of America East and the Fellowship of Southern Writers.
She is currently a member of the Residency Five at Signature Theatre Company in New
York City. Katori will make her directing debut with a film adaptation of Hurt Village. Find
out more at http://katorihall.com.

A series of Talkbacks, Cast Conversations, and a Panel Discussion — The Mountaintop:
the Civil Rights Movement from Rev. Martin Luther King, Jr. to Black Lives Matter — will
provide audiences with an opportunity to engage in the ongoing conversation about the
American social contract; its promise of equality, how it has and has not made space for
African Americans, and why theatre is a particularly powerful medium for exploring
difficult topics.

The Panel Discussion will be held on Sunday, August 21, following the 2:00 p.m.
matinee (approx. 3:30 p.m.) Producing Artistic Director Daniel Elihu Kramer will
moderate the discussion, which will feature Natalie Sowell, Associate Professor of
Theatre at Hampshire College and a specialist in theatre for social change. “The
Mountaintop is a play of great power and great imagination and it comes at an important
time,” said Kramer. “Equality is still a central, and unresolved, question in our country.
Katori Hall has the courage to see the challenge of our present moment, and of our
future, in our history.” A grant from Mass Humanities, with a focus on Negotiating the
Social Contract, is helping to produce the play and the audience-engagement series.
Show times for The Mountaintop are 8:00 p.m. Wednesdays, Thursdays and Saturdays,
and 2:00 p.m. Thursdays, Fridays, and Sundays. Ticket prices are $37.50 for general
audiences and $10.00 for students and residents of Chester. Tickets may be purchased
online at chestertheatre.org, or by phone at 1.800.595.4TIX (4849). Special rates for
groups of 10 or more are available.

In brief:
The Mountaintop by Katori Hall will have its Regional Premiere at Chester Theatre
Company August 18-28.

The theatre is located in the Chester Town Hall, 15 Middlefield Road, Chester, MA,
01011.