What a joy to be in London seeing theatre again. We arrived Sunday morning, and gathered that evening for a welcome dinner. The renovated Royal Lancaster London Hotel is beautiful, and they did a lovely job with dinner. Meeting friends both familiar and new, we shared a terrific meal, introduced ourselves, and talked about the week ahead. 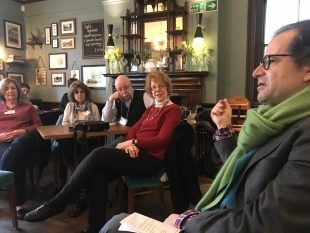 The next morning we gathered in the upstairs room of the Swan Pub (also just renovated!), and heard from Matt Wolf (London theatre critic for the New York Times) about the theatres and plays we’d be attending over the week. Matt is a marvelously fluent expert in all people and things theatrical, and his encyclopedic knowledge and evident enthusiasm was just the right launch for our first full day in London.

A number of travelers took the day to visit the Tate Modern, with its enormous current Modigliani exhibit. That evening we gathered at the Duke of York’s Theatre on the West End to see Juliet Stevenson and Lia Williams in Robert Icke’s production of Mary Stuart, by Friedrich Schiller. This classic work of German romanticism about the relationship between Elizabeth I of England and Mary Stuart–two queens–was approached from a very contemporary perspective. The play itself explores how the two queens–one in power and one in prison–are in many ways the same, or combine to be one.

The production approaches this idea by assigning to chance each night the question of which actor will play which role. The full cast came on stage. An actor pulled out a coin. Juliet Stevenson said, “heads.” The actor spun the coin in a bowl. We watched it spin (on video) until it landed–this night on tails. Then everyone on stage turned to Lia Williams, who had won the coin “toss,” and bowed. In this way, fate chose the winning queen.

Much of the production was astonishing, including some of the performances, and we had plenty to talk about Tuesday morning. During the day Tuesday, some travelers went to the National Portrait Gallery. The gallery currently has a fascinating exhibit about four early English photographers who helped develop the very idea of art photography. We were also struck by two portraits–one of Elizabeth I and one of Mary Stuart–sharing a wall. 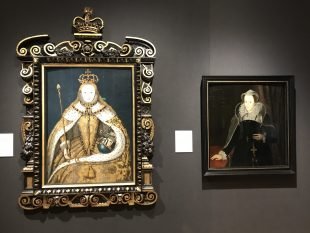 Elizabeth I and Mary Stuart

Tuesday evening, we headed to the Hampstead Theatre–located in the Swiss Cottage neighborhood–to see a revival of Tony Kushner and Jeanine Tesori’s musical (chamber opera?) Caroline, or Change. Set in Lake Charles, Louisiana, this partially autobiographical work explores the lives of Caroline, an African-American mother of four who works as a maid, her family, the Jewish family she works for, and the relationship between Caroline and Noah, the young son in that family. More on that production in our next blog entry, following Wednesday morning’s conversation, so stay tuned!