Wednesday morning we met again at The Swan to discuss the previous night’s performance of Caroline, or Change at the Hampstead Theatre. The play (musical? chamber opera?) has many ambitions, and it was clear many of us didn’t feel it had accomplished them all. There were some excellent performers, and some puzzling choices, all mixed together. 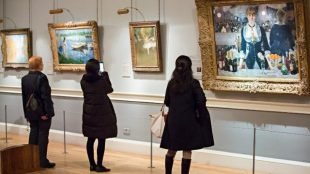 Following another day of surprisingly good weather, with visits to the Courtauld Gallery and the Wallace Collection among other places. The Courtauld is always a lovely place to visit. With a remarkable collection of impressionist masterpieces, the museum sits at the entrance to Somerset House, which itself is filled with galleries of contemporary work.

Wednesday evening we went to the Gielgud Theatre in the West End, to see Jez Butterworth’s new play The Ferryman. The play originated at the Royal Court Theatre, and will be headed to Broadway later this year. With a cast of around twenty actors (including an eight month old), a goose, rabbits, and more, the play is both enormous in scope and intimate in its details at the same time. The play focuses its attention on a farming family in Northern Ireland in 1981, with attention to the deep history of Ireland’s relationship with England, as well as on the particular relationships within the family. 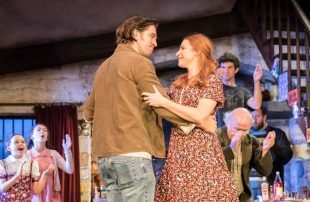 Owen McDonnell and Rosalie Craig in The Ferryman.

At Thursday morning’s Talkback, we all expressed our admiration both for the script and for the performances. The production is in some roles on its third actors, yet each performance was captivating, full, and detailed. The play has a deep sense of history, and of its powerful impact on each individual’s life. Performances by Owen McDonnell and Rosalie Craig stood out, but the entire cast impressed us, including the many children. This is one we will be recommending to friends (and perhaps seeing again) when it comes to New York.