Rehearsal photo from The Kid Stays in the Picture

Wednesday morning we met after breakfast for our second full Talkback, to discuss Simon McBurney’s stage adaptation of the Robert Evans Hollywood memoir The Kid Stays in the Picture, at the Royal Court Theatre. In keeping with the topic of the movies, the production itself used a wide range of cameras, projections, sound effects, etc.

Simon McBurney–with his theatre company Complicité–has been working increasingly with technology in theatre, most recently in his Broadway show of this season, The Encounter, at which each audience member wore headphones. In fact, the theatre had pushed back both previews and press night for The Kid Stays in the Picture, to have more time to get the technology working smoothly.

Our tour-goers generally thought the technology worked just fine. Where we had more questions was about what story and purposes the technology was being used to tell. On a stage of upright microphones, a rear set of glass panels, a small refrigerator, a chair, a desk, and some cameras and a camera track, actors conducted what one among us described as a radio play, and another called the most technologically advanced staged reading ever.

We discussed possible goals of the production–were we supposed to empathize with Robert Evans, or judge him? Was the adaptation taking his point of view? Commenting on it? An English audience member had turned to one of us at intermission and asked whether we felt the play was a commentary on America.

For many, the technology served to distance us from the character, rather than bring us into the story. What, some wondered, was the future of technology in theatre? Some travelers who had seen The Curious Incident of the Dog in the Night-Time on an earlier trip recalled that technology in that production added to our sense of the central character’s experience. Though The Kid Stays in the Picture may not have been everyone’s favorite play, the conversation we had was fascinating.

After the Talkback, some took the time to visit a gallery, or have lunch at a favorite restaurant, or visit a bookshop. A favorite bookshop here is Hatchards, on Picadilly, which has been in its same spot since 1797.

There were only a few hours before the matinee performance of Who’s Afraid of Virginia Woolf, at the Harold Pinter Theatre on the West End. You can read more about the show after our Talkback Thursday morning. Worth noting now is how many of us came out after the performance ended at 5:30 wondering how the actors could possibly do another performance that started two hours later. 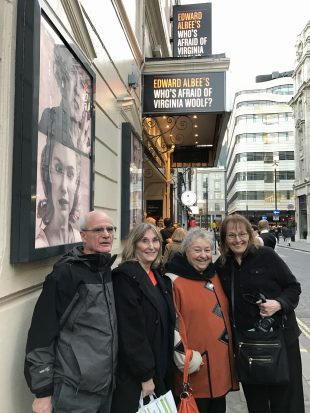 Icek and Rachel Aizen, a visiting friend, and Diana Stein

With the evening free, many travelers took the opportunity to go out for a special dinner, sometimes meeting friends in the city. Others headed to an additional play, such as Tom Stoppard’s Travesties at the Apollo Theatre, or Stephen Karam’s Speech and Debate at Trafalgar Studios.