Named “One of 6 Plays That Reckon With an Anxious America” by The New York Times, this gripping work tells the story of four auto workers barely scraping by in a Detroit auto parts factory in 2008.

Morisseau was inspired to pen Skeleton Crew by an encounter she had with a woman in her home city. “This is the Motor City. This is where people make cars. Now it’s become a city where people are living in their cars.” (The New York Times) 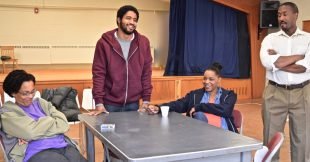 In the spirit of August Wilson’s Pittsburgh Cycle, Skeleton Crew is the third installment of Morisseau’s Detroit Trilogy. Chester Theatre Company is proud to present the New England Premiere of this important work by a playwright who is shining a bright light on critical issues our country is grappling with today.

Our heartfelt thanks go out to season sponsors Richard and Carol Seltzer and to production sponsors Karen and Charles Schader for their generous support.

Tickets for all performances are on sale at
www.chestertheatre.tix.com
Information on dates, times, and post-performance talks and events can be found on the website.
Tickets are selling quickly — please place your orders soon!