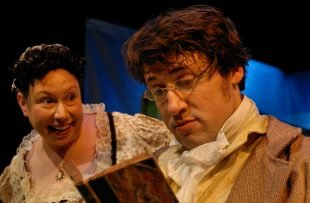 According to CTC Artistic Director Byam Stevens, “It’s great to be collaborating with Maggie Mancinelli at Capital Rep and giving audiences in our wider region a chance to see this terrific piece. It’s also further evidence that CTC consistently punches above its weight; this is our fourth transfer in five years, following Off Broadway remounts of The Bully Pulpit and The Dishwashers and last summer’s Last Train to Nibroc at Peterborough Players. We’ve moved 17 productions to other venues in the last 15 years, a record very few companies can match.”

pride@prejudice had its world premiere at Chester Theatre Company last July as part of CTC’s 2011 season Classic Stories, Contemporary Voices. In pride@prejudice, Daniel Elihu Kramer’s delightful adaptation of Jane Austen’s classic romance, five actors play over thirty roles, adding other voices – bloggers, commentators, scholars, even Jane Austen herself – to the novel’s beloved roster of characters. Kramer’s affectionate take on one of the world’s most popular love stories not only delivers all the delightful twists and turns of the novel’s plot, it looks at our love affair with reading and with this extraordinary book in particular.

“This witty, new version celebrates Austen’s timeless romance as it is known and loved,” according to Capital Repertory Theatre Artistic Director Maggie Mancinelli-Cahill, “Long time Jane Austen fans will be reinvigorated by this new look at an old friend, and newcomers to the book will be swept away by the comedy and the romance.”

pride@prejudice will not be CTC’s only uncommon love story playing this year. Riffing on that theme, CTC will present four other tales of unusual romance in this summer’s season, each grappling with love’s diversity using equally diverse strategies: Rajiv Josephs’ triangular love story of origami and other complexities, Animals Out of Paper (July 5-15); Elizabeth Egloff’s comic fantasy of love and transformation on the Nebraska prairie, The Swan (July 18-29); Arlene Hutton’s chronicle of late-night pre-marathon confessions and connections, Running (August 1-12); and Dipika Guha’s whimisical tale of supernatural adventure and long-delayed meetings, The Betrothed (August 15-26). For show times and to purchase tickets, visit the “Buy Tickets” section of our website