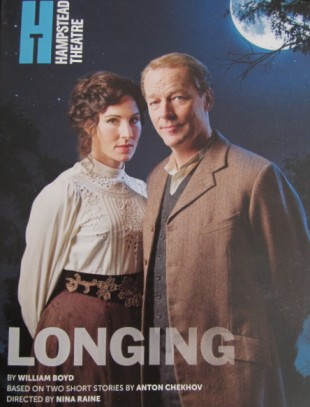 LONGING, William Boyd’s adaptation of two Chekhov short stories gave us an opportunity to talk in depth about Chekhov, the Fourth Wall and the art of adaptation.

Set Designer Lizzie Clachan provided a fully built, three dimensional, charming and dilapidated summer house on a Russian country estate. Complete with a grass yard. This fully built set, signaled the convention that the Fourth Wall would be in, that we as the audience would be watching the event taking place and that no acknowledgment of our presence would be made. Further as a literal set, it required no work on the part of our imaginations to complete the illusion — what would take place in front of us would be linear, left to right, psychological realism driven work.

As a doctor, Chekhov prized the combination of clear sight and compassion. According to playwright William Boyd, Chekhov “saw life and the human condition with the utmost clarity… and he refused to judge or condemn.” As a Russian writing in the late 19th century he was portraying an entropic society and this sense that the social order is breaking down informs all of his plays — there is a sadness and sense of fate that pervades the stage. Perhaps, the quintessential Chekhovian line is Masha’s response to the question about why she’s wearing black: “I’m in mourning for my life.”

Chekhov’s protagonists seem helpless to change their conditions — only the secondary characters have the ability to prosecute an action. Often they make insubstantial, impulsive tactical moves, but these thrusts are always blunted, aborted, retracted, or doomed to failure. The entire arc of LONGING moves toward a kiss that at the very last moment doesn’t happen. Varia and Kolia are left with the memory of the moment when their lips almost touched.

Actors love Chekhov because his approach requires such subtlety — the action is character driven and it swings from comedy to tragedy constantly. In this production his sensibility was particularly well served by Tamsin Grieg and Iain Glen, who were poised, centered, emotionally available, grounded and very connected. 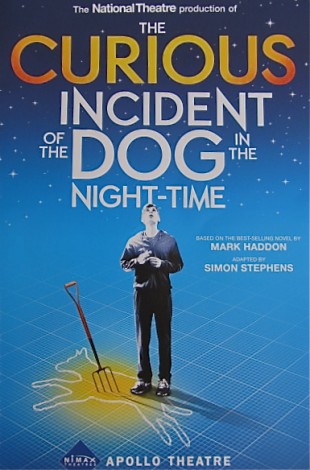 THE CURIOUS INCIDENT OF THE DOG IN THE NIGHT-TIME

Our final London Tour TalkBack came to a close with a preview of the 2013 Season from artistic director Byam Stevens and, for the second year in a row, a musical retrospective of the week penned by John Joelson and Joanne Levin, performed by Mr. Joelson. Sung to an array of tunes from The Rolling Stones to Marvin Hamlisch, the musical tribute was greeted by gales of laughter — a fitting end to a delightful week.

Saturday after the TalkBack is an open day, so people headed off in different directions to shop, see shows, go out to dinner, etc. Two shows in particular drew large contingents: the aforementioned THE CURIOUS INCIDENT OF THE DOG IN THE NIGHT-TIME and OUR COUNTRY’S GOOD in a 25th anniversary production at a brand new theatre complex across Buckingham Road from the mews of Buckingham Palace. Timberlake Wertenbaker’s modern classic tells the true story of a production of Farquhar’s The Recruiting Officer, mounted by the convicts in the newly settled penal colony of New South Wales (Australia). While the choice of play is highly ironic, given the demographics of the cast, the play as a whole functions as a paean to the humanizing and transformative nature of the art of theatre. The convicts, a cynical lot reduced through circumstance to a level of existence hardly more than animal, learn that in order to successfully put on their play they will have to learn empathy and teamwork. Their unforeseen reward — self esteem and compassion for others.

In many ways, OUR COUNTRY’S GOOD recapitulated the theme we’d been following all week — that we should prize empathy over judgment.

At 9:00 Saturday night we had a final gathering in the fire-lit lounge of the Lancaster Hotel. Over platters of cheese and petit-fours, and liquids of various kinds, clusters formed and reformed as we compared notes, chatted, and made plans to keep up in the future. As the clock ticked towards midnight, the prospect of an early departure Sunday bade us exercise wisdom over valor, and so to bed. A warm, congenial, and welcome close to another truly superb London Theatre Tour! 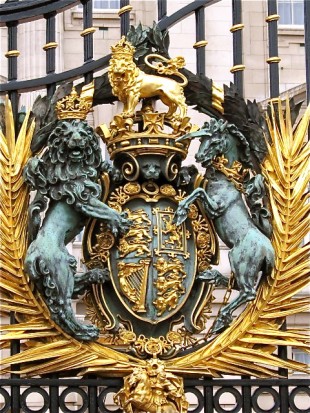