Opening with our usual exploration of the set as an avenue into the world of the play, we were faced by immediate differences. The set for the first scene was a wall placed on the diagonal, sitting on a turntable. The Dollar Store back door set into the wall was surrounded by urban detritus — a dumpster and a shopping cart filled with discarded junk. Compared to THE WEIR and its uninterrupted action in a single setting, GOOD PEOPLE has discrete scenes in multiple locations. The setting therefore is less completely built, more sculptural and more fluid in its ability to change locations (via the turntable) quickly.

The lighting in the First Act featured the use of extreme downlighting, and a lack of color. The result is a starker, bleaker atmosphere with deep shadows under the eyes and chin and shorter shadows cast by actors, diminishing them in dimension. We compared this with the lighting in the “ghost story” section of THE WEIR, in which very low front lighting cast elongated shadows of the actors up onto the walls behind them, giving them added dimension.

This stark setting provided an apt environment for the story of a woman’s desperate search for a job in the economic downturn following the 2008 collapse of the mortgage market, starting with her firing in the alley behind the Dollar Store in Scene One. Her one ray of hope is to seek help in the form of a job from a high school boyfriend who “got out” of Southie and went to the University of Pennsylvania, and now has a prosperous medical practice.

The play explores a number of themes — luck and fortune, social Darwinism, moral judgment of poor people, and empathy.

Blind luck plays an unusually active role — the desperate characters gather twice in a bingo hall — and provides a real twist in the final scene, a scene that closes the circle with the Scene One firing. One’s hopes sometimes come down to a bingo win, when you’ve “been dealt the shit card.”

But, broader issues of good fortune are also pursued: does one recognize the opportunity when it presents itself? Is one brave enough to grasp the opportunity or is one more comfortable in the familiar realm of failure? How are the freedoms to grasp opportunity limited by personal circumstance? Why is that so many people who become successful deny their good fortune and assert that they’ve earned all their worldly success?

In confronting her ex-boyfriend, Margie, the protagonist, says “You had a father at home, a father with a job.” Sometimes good fortune is hard to perceive. The characters’ straightened circumstances force them to make tough choices, choices  that may be morally or ethically questionable: “You have to be a prick to get anywhere.” This kind of Social Darwinism brings with it a lack of empathy that is soul destroying. One of the major dramatic questions in the balance is the paternity of Margie’s adult, retarded daughter Joyce. When asked why he never came to find her after he went off to college, Mike asserts: “It’s not my job to find you.”

Perhaps, this lack of empathy is a legacy of the Puritan work ethic — a corollary that equates financial reward with moral rectitude. A legacy that gives us the “undeserving poor.”

Imelda Staunton’s brilliant portrayal of Margie, a role created in New York by Frances McDormand, led to a discussion of actor commitment — ability and willingness to immerse oneself completely and without ego into a role. In the Second Act, Steve’s wife Kate, the product of a wealthy African-American family, forces Margie to come face to face with the person she’s become — how her desperation has warped her essential “good people” self. This moment of realization was shattering in its depth and clarity — truly a revelation. Imelda Staunton’s portrayal was the first in a series of powerhouse performances by women the week holds in store for us.

Wednesday performance was a matinee, so we had time for little more than a walk in the blue-sky sunshine of the park before heading off to Shepherd’s Bush for the British Premiere of Jackie Sibblies Drury’s WE ARE PROUD TO PRESENT…. at the Bush Theatre. 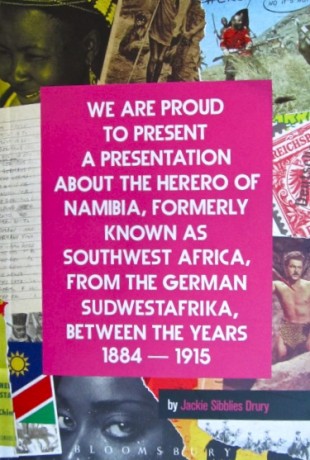 Program Cover, WE ARE PROUD TO PRESENT….