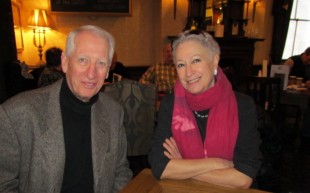 Our TalkBack Thursday began with an exploration of the way the action of THE CAPTAIN OF KÖPENICK proceeded (on the Text/Subtext continuum) as compared to Pinter’s OLD TIMES. Written in 1931, Carl Zuckmayer’s play which he subtitled “A German Fairytale” proceeds almost completely through Text. As a political and social satire, the play hardly concerns itself with Subtext at all. While there is some irony, the intentions and motivations of the characters are clearly stated.

The challenge facing the writer of satire is how to make the bitter pill of social commentary easier to swallow. The answer of course is comedy and often music, which keeps the mood from sinking inexorably. Zuckmayer, who was a colleague of Brecht and Wedekind at the Berliner Ensemble, employs many of the same conventions one encounters in their plays — use of banners and slogans, popular music (and hymns), short discrete scenes, action set in previous historical periods (in this case 1906) and characters from the “lower depths.” 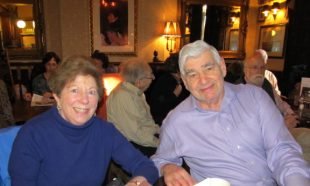 Jane and Marty Schwartz at TalkBack

Voigt, the hero of the play, is a lifelong petty criminal, who in the first scene of the play is being released from prison. Through a bureaucratic lapse, he has no identity papers, and therefore can’t get work. In fact, the bureaucracy which was intended to protect citizens from the excesses of the powerful through the rule of law has now become an endless labyrinth that forces the citizens to spend their lives in pursuit of permits. Act I follows Voigt as he resorts to theft and skullduggery in order to survive.

At the top of Act II, while being chased by the police, Voigt happens on a costume shop and he exits with a captain’s uniform, which magically transforms him into a figure of respect and power. Ultimately he invades the town hall to liberate the treasury. This fairytale of transformation was actually based on a true case, in which Voigt became something of a minor celebrity.

The many scenes and change of venue in the script were inventively served by all the magic that the Olivier Theatre at the National has at its disposal. If a play has 20 scenes and venues, then this is the first challenge the director and design team must confront. in this case, the fairytale nature of the script was brought to life with the magic afforded by an array of stage machinery, revolving turntables, lifts, flies, projections and lighting effects that kept the action moving while providing a certain whimsical effect.

At the center of all this theatrecraft was a performance of hugely human proportion from the great actor Sir Anthony Sher. His ability to imbue this petty criminal with a warmth and charm truly held the enterprise together. As a South African Jew, he knows what it is to be an outsider, and he brought all that knowledge to bear on this large and complex undertaking. 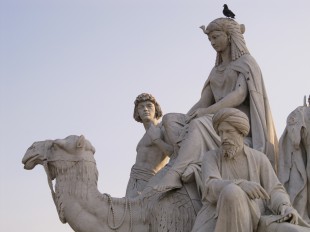 Thursday was the most beautiful day so far, with the sun in evidence and mild temperatures, so plans were adjusted accordingly, with many of us out and about on walking expeditions. Hyde Park shone in its early spring splendor — from the Italian Water Gardens to the Princess Diana Memorial to the Albert Memorial, the park was hopping with fresh air lovers of the two and four legged variety.

The hardcore theatre junkies were able to get their fix at the Thursday matinee of THE CURIOUS INCIDENT OF THE DOG IN THE NIGHT-TIME, an adaptation of Mark Haddon’s best selling novel about a boy (Oscar) with Asperger’s Syndrome who sets out to solve a mystery. What starts out as a puzzle turns into an Odyssey that leads back to Oscar himself – truly a coming of age story. Marianne Elliott whose theatrical creativity was so much a part of the success of WAR HORSE, brings that same inventiveness to the intriguing and beguiling settings and movement of CURIOUS INCIDENT. The show was a sold out hit at the National, and is a very tough ticket in its West End transfer — hopefully it will come to NY before too long.

After a series of dinners hosted by Board Members Cipora Brown, Gail Perlman, Bob Tutnauer and Artistic Director Byam Stevens, we were back in the West End for David Hare’s THE JUDAS KISS, starring Rupert Everett in highly praised portrayal of Oscar Wilde. 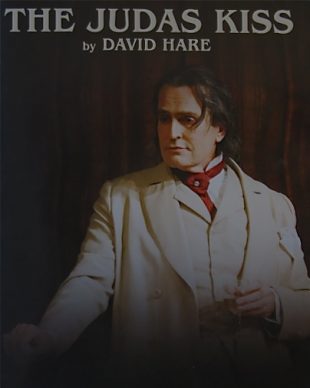