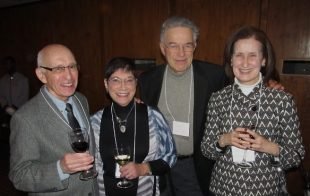 This year, the London Theatre Tour has grown so popular that–for the first time–we have two separate weeks in London. Because Group Two is seeing the same plays as Group One saw last week, these entries will talk less about the plays and Talkbacks, and more about other aspects of the tour. 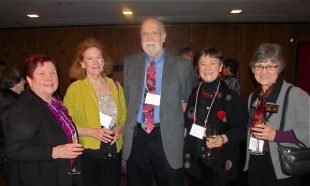 As Group Two arrived Sunday morning at the Lancaster London Hotel, Group One was just getting ready to head home. In fact, some old friends got to say hello over the terrific breakfast that the hotel puts out each morning. Then Group One took the bus back to Heathrow, and Group Two settled in to explore London, and to rest up for our festive first night dinner.

The opening dinner is always a lively event, and a chance for tour participants to get to know each other. We started with drinks and appetizers, then found our places and settled in for a delicious meal. Before dessert, Board member Gail Perlman welcomed us all, then we heard from Artistic Director Byam Stevens. We then went around the room, as each of the tour participants introduced themselves. We have a wonderful mix of returning folks and new, and it was fascinating to learn what had brought each of us to London. Of course what we all shared was a love of theatre, and excitement about the week ahead. 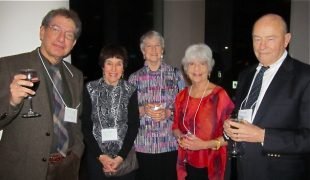 The next morning we gathered upstairs at The Swan pub, where we heard from Matt Wolf, long time London theatre critic for the International New York Times (formerly the International Herald Tribune). Those of you who read the London theatre reviews in the New York Times are reading Matt’s work. Matt’s knowledge of theatre in general–and of the London theatre scene in particular–is encyclopedic. He shared a great deal about the five plays we’ll all be seeing together, about the artists involved and the theatre companies.

Matt also gave recommendations for additional plays that some of us might want to try to see during our time here–mentioning productions both large and small. His enthusiasm is utterly infectious, and we all went out from our session excited to start our theatre-going for the week. 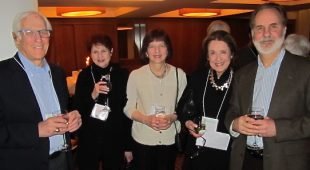 Some of us visited the Courtauld Gallery later in the day. The Courtauld has an astonishing collection, in a space intimate enough that you experience each painting (or sculpture or drawing) quite personally. There are pieces there you know only from reproductions, and it’s always a treat to step into a room and find yourself face to face with the real thing. The collection is broad-ranging, with particular strengths among the Impressionists, and a marvelous series of Cezannes. As the Cezanne canvasses move further and further from realistic space, you can feel the vibrations of Cubism hovering at the edge. The Courtauld is itself a beautiful building, and part of Somerset House, a stunning neo-classical building and courtyard, built atop the remains of a Tudor palace. Inside the Somerset House are now scattered many galleries of contemporary art, and some of us visited exhibits of photographs engaging with Scarcity and Waste at Syngenta Photo, and another exhibit entirely about beards.

Many of us met–or ran into each other–at dinner at Bocca di Lupo, a lovely and welcoming Italian restaurant, just around the corner from the Geilgud Theatre. That night, we saw our first play: THE CURIOUS INCIDENT OF THE DOG IN THE NIGHT-TIME, adapted by Simon Stephens from the novel by Mark Haddon.