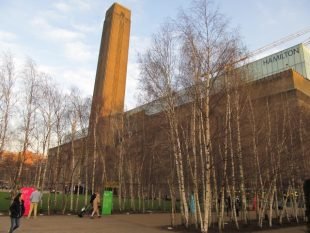 On Tuesday morning, we all met again at The Swan for our first true TalkBack of Week 2. We had so much to discuss about THE CURIOUS INCIDENT OF THE DOG IN THE NIGHT-TIME. One topic that particularly held our attention was the range of strategies the production employs to give us a sense of what Christopher–the central character–is experiencing. We talked as well about the two acts of the play, and how each tells a deeply archetypal story. Act One is a detective story, and Act Two is an odyssey. (For a full discussion of THE CURIOUS INCIDENT… see the blog post from the first week of the tour here)

After the TalkBack, groups went off on assorted London adventures.Because we were seeing a play that evening across the Thames at the Wanamaker indoor Elizabethan Playhouse (part of the Globe complex), some of us crossed the river to explore Southwark. There were visits to the Tate Modern–truly one of the great art spaces in London or anywhere. 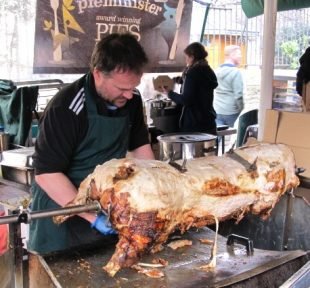 Walking along Bankside, you pass a full-scale recreation of Sir Francis Drake’s ship, The Golden Hinde. At the George Inn, you can drink a pint where Charles Dickens set scenes from his novels, in a courtyard where Shakespeare himself may have performed. The Borough Market is filled with open air stalls selling fruits, vegetables, sausages and cheeses, and every kind of prepared food as well. You can also get a good look at one of London’s newest iconic buildings: the Shard.

Following the performance of THE BROKEN HEART, we walked back across the Thames–a beautiful scene as we crossed the Millennium Bridge lit up at night, and approached St. Paul’s. (For a discussion of THE BROKEN HEART see the blog post from the first week of the tour here)

The next morning, we had our discussion of THE BROKEN HEART. While it may not have been everyone’s favorite performance, it led to a terrific conversation about directing, and about a director’s responsibility to the audience. The Wanamaker theatre itself is a marvel, a complete recreation of an indoor Elizabethan playhouse, both a theatre and a time
machine all at once.

A range of adventures that day included visits to the National Portrait Gallery–currently exhibiting a show of Sargent portraits, and to the Churchill War Rooms. The Churchill War Rooms are another sort of time machine. Down in those spaces, you feel transported back to that frightening moment in history, when outcomes were unknown, and so much hung in the balance.

Wednesday finished with a striking production of Arthur Miller’s THE VIEW FROM THE BRIDGE, directed by the Flemish director Ivo Van Hove.