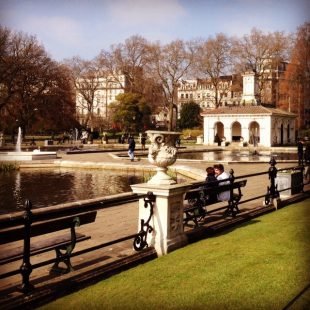 The Italian Fountain in Hyde Park

Later in the day, some of us went to St. Martin in the Fields, where there was a beautiful performance of sacred music, celebrating Archbishop Thomas Cranmer, who was the creator of the 1549 Book of Common Prayer. The group St. Martin’s Voices performed in this evocative setting.

Thursday evening, many of us gathered before the play for group dinners, which Gail Perlman had taken the time to organize for us. (Thank you, Gail!) There was one table at Pasticcio, a very friendly Italian restaurant, and two tables convened at Bradley’s, which describes its cuisine as Great British with a French accent. The dinners provided a wonderful opportunity to catch up on various adventures, and to get to know our fellow travelers better.

Both restaurants were in a neighborhood known as Swiss Cottage. The name comes from an inn built in 1804, in the style of a Swiss chalet. We were there because Swiss Cottage is the home of Hampstead Theatre, where we went to see the play STEVIE, about the life of the poet Stevie Smith, starring Zoe Wanamaker. Hampstead is a particularly inviting theatre–both contemporary and intimate.

The next morning, we discussed STEVIE, then set off to new adventures in London. (For a discussion of STEVIE see the blog post from the first week of the tour here) Friday was the most beautiful day of the week, and the sun invited many of us to long walks and outdoor tours. A walk in Hyde Park led to the Serpentine Gallery, and the Serpentine Sackler Gallery–a pair of free galleries located within the park, both dedicated to contemporary art. The Serpentine featured large-scale paintings by the American artist Leon Golub, while the Serpentine Sackler had a series of evocative sculptural works by Pascal Marthine Tayou–a Belgium based artist born in Cameroon. 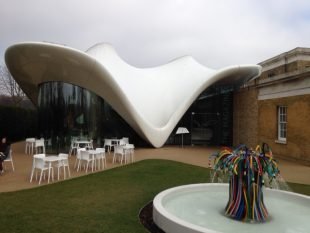 That evening, we all met on the South Bank at the National Theatre–with its three theatres, multiple restaurants and coffee shops, and impressive bookstore. The National is–by far–the largest and most fully equipped of all of Britain’s institutional theatres. We were at the largest of the three theatres–the Olivier–to see David Hare’s adaptation of Katherine Boo’s book BEHIND THE BEAUTIFUL FOREVERS (For a discussion of BEHIND THE BEAUTIFUL FOREVERS see the blog post from the first week of the tour here).