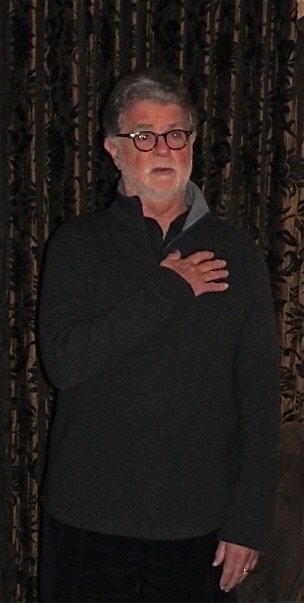 TalkBack opened on Friday with a departure from our usual process. Intrepid Robert Tutnauer found himself volunteered to participate in an Acting 101 exercise. So that he could work with a text that he knew, he was asked to recite the Pledge of Allegiance. Which he did with gravity and solemnity, but perhaps also a little by rote. We proceeded to do the type of textual analysis that actors and director employ in the early days of rehearsal, while we are still sitting around a table. The deeper meanings of words like “allegiance”, “flag”, “republic”, “indivisible”, “liberty”, and “justice.”

Most importantly, we established an action he could play — taking an oath that expressed his deepest beliefs. He performed the Pledge a second time, and this time the progression and ownership of thoughts was much more clear. We could follow not just the words, but the thinking informing them.

he was the citizen of an oppressive sate, perhaps Chile under Pinochet, a state where people were afraid to express their thoughts, a state where people disappeared in the middle of the night never to be seen again, where he had lost a brother and father. He was asked to imagine that he had taken his most precious possession and convert it to cash so that he could escape this state, a conversion process that was dangerous enough to cost him his life if discovered.

Bob could barely begin, he was so choked with tears, and his heartfelt rendering of the Pledge was met with spontaneous and enthusiastic applause.

John Ford’s romantic tragedy is related in Jacobean verse, and recitation in key roles made the action hard to follow at times. The Language issue and other A issues raised by the production gave us the opportunity to explore the Director’s role in greater depth.

One of the director’s first responsibilities is to create a context for the action to be presented. In this case, ancient Sparta, a state where the Warrior’s code is paramount — subjugation of self in service to the unit, denial of personal desires and obedience to the chin of command. A state where Honor and Shame are active players on the court stage. The unusual nature of Ford’s story would not have made sense had the play been set in Athens, a democracy. Our sense was that this key element of Context was not sufficiently developed in the production.

Another of the director’s key responsibilities is to find the poetic and theatrical Truth at the center of the play. To do this, the director has to believe in the material and in the audience’s ability to apprehend it. If that faith wavers, the director will start to entertain the audience — the pace will pick up, the staging will become more “inventive”, the stage effects will multiply, all in a misguided effort to keep the audience engaged.

These directorial responsibilities are especially important in a play in which the primacy of language is paramount. THE BROKEN HEART was written for an audience that was largely non-literate, that had no access to television, film, recorded music, or internet. Information was transmitted by voice with little in the way of visual reinforcement. Current research suggests that this audience was more acute and more active in their listening than we are. We struggle a bit with verse plays in a way that they might not have, and we need the director’s help.

The production also afforded us the chance to talk about Costume — whether the costuming is Iconic (one look for each character throughout the play ) or Organic (costume changes with the passage of time). TBH actually employed a mix. Costume color symbolism and the manner in which costume conveys social status were also discussed.

The Jacobeans loved their stage magic – hence, props and furniture that do unusual things provided them with the kind of magic that special effects departments do for our current films. Inventive use of stage blood seems to have held a particular fascination for the Jacobeans, and TBH does not disappoint in either respect. — with props, furniture and blood producing gasps from the audience at regular intervals in the second act.

The production was resented at the Wanamaker Playhouse, a recent addition to the Shakespeare’s Globe complex. The idea was to add an indoor Elizabethan era stage to complement the outdoor one. In addition to the romantic effect of seeing a play lighted completely by candles, the possibility of music that can actually be heard is introduced. In a gallery above the stage musicians playing period instruments supported the action with music that underscored the dialogue as well as the dance and pageant sequences.

The geometry of the house, the gorgeous woodwork and painting, the period music, costumes and lighting, even the period benches all acted functioned as a time machine transporting us back in time 400 years. Another kind of magic. 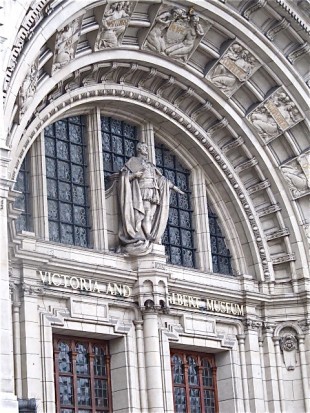 The Victoria and Albert Museum Entrance

After TalkBack some of us headed across the Park to the Victoria and Albert Museum’s Theatre Collection. In addition to the permanent exhibits exploring stage craft — including an interactive set where one could build different lighting effects or modify a sound design, the collection features costumes worn by luminaries ranging from Richard Burton’s HENRY V doublet to Margot Fonteyn’s SWAN LAKE tutu, from Judi Dench’s SEAGULL gown to Maggie Smith’s full Edwardian rig for Lady Bracknell in THE IMPORTANCE OF BEING EARNEST. Costumes not your thing? Well you can take in a fascinating series of set models, posters, notebooks, scripts and filmed performances.

Two sets of costume pieces seemed particularly striking. Jocelyn Herbert’s masks for THE ORESTEIA are stunning — everything a masks for a Greek Tragedy should be — primitive, expressive, fascinating and somehow evocative of the horror. Two of Julie Taymor’s imaginative, innovative, and inventive costumes for THE LION KING are on display, supported by a video interview with her, discussing how they evolved out of her experience in world theatre cultures.

In addition to the permanent exhibit, the V&A was hosting an extensive collection imported from the former USSR — The Russian Avant-Garde: Theatre, War, Revolution and Design from 1913-1933. The exhibit tracks the impact on Russian and world theatre, still felt today, of the importation artists from the avant-garde to the world of design for theatre, opera and ballet.

Prior to this importation, the leading edge of Russian theatre was Constantin Stanislavsky’s productions of Chekhov’s plays at the Moscow Art Theatre. Stanislavsky rediscovered the Naturalistic and Representational, leading to style that we now know as Psychological Realism. This work was the bedrock of Group Theatre, The Actor’s Studio and much f American Theatre for the second half of the 20th century.

The designs for Stanislavsky’s productions were Decorative, they supported the plays in a manner that was largely literal and often in the form of two dimensional painted drops and flats. The Russian Avant-Garde designers were more interested in sets that were Sculptural — three dimensional, dynamic use of the stage volume — sets that evoked the inner world of the play rather than the outer world of the play. This is the type of set you are likely to see today at CTC.

The influence of Cubism and Monumentalism is readily apparent in the bold geometric, color saturated forms that characterize the work of Kazimir Malevich, Alexandra Exter, Alexander Rodchenko, and Sergei Eisenstein, who was a set designer before he became the world renowned director of milestone films like THE BATTLESHIP POTEMKIN.

The groundbreaking work of Vsevolod Meyerhold was heavily represented, including film segments of examples of his new acting system called biomechanics, which shifted the emphasis in acting from the vocal line to the physical line, adopting movement principles from a wide range of physical disciplines, from dance to acrobatics. Meyerhold believed that theate was not a mirror to Nature, but a magnifying glass.

By 1934 Stalin was well enough established that his support of a new Socialist Realism made it the dominant aesthetic. The vast majority of the innovative designers in the Avant-Garde movement fled Russia. Meyerhold, however stayed. He was arrested in 1938 and executed by firing squad in 1940. And so, the movement came to an end. We are remarkably fortunate that these materials were preserved and not destroyed over the intervening decades. 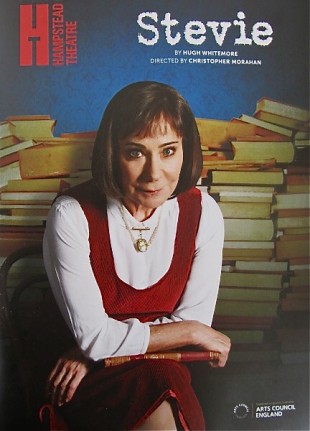 Friday night would bring to a close the CTC program of plays in London, with Zoe Wanamaker’s acclaimed portrayal of British poet Stevie smith in the eponymously titled STEVIE.