The TalkBack Wednesday morning gave us a chance to compare adaptations — just as THE CURIOUS INCIDENT… was adapted by Simon Stephen from Mark Haddon’s novel, BEHIND THE BEAUTIFUL FOREVERS was adapted from Katherine Boo’s National Book Award winning work of epic journalism by David Hare.

Adaptation is an art form of its own, and its practitioners are called upon to distill a full length work into the two hour traffic of the stage. This means sacrifices have to be made — subplots cut, favorite characters eliminated, scenes pruned to their essence. In the case of THE CURIOUS INCIDENT the original work, as previously reported, was tightly structured — the protagonist and his journey were clear. BEHIND THE BEAUTIFUL FOREVERS is a sprawling work that does nothing less than portray an entire community. To adapt the work for the stage takes an admirable ambition.

David Hare has always been an advocate of political theatre — he wants to change the world. This project gives him the opportunity to examine the effects of Western economic systems on an emerging third world powerhouse. It gave us an opportunity to discuss basic elements of dramaturgy, beginning with the difference between Story and Plot. 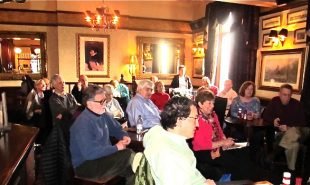 Plot is the enchainment of events that the playwright sets before us — the things that actually happen on the stage. These are facts, and they must be presented. Story is the interpretation of those facts by the director and his/her cast and design team. Just as our legal system is based on advocates interpreting the facts of a case to arrive at differing conclusions i.e. Guilty or Innocent, theatre creators will interpret a script in wildly varying ways.

In classical dramaturgy, we follow the journey of a protagonist, who desires to change his/her circumstances and achieve goals. They must overcome obstacles, often set in their path by the antagonist(s). The protagonist develops strategy to achieve those goals and executes the strategy in a tactical manner. These tactical endeavors are Action, the reason while we call actors actors. And, the type of Action tells us what kind of Story it is, Revenge, Romance, Hubris punished, Tragic Injustice, etc.

The goal of this methodology is to put the thing itself onstage through enactment. Theatre is not “about” anything, it is the thing itself. Journalism, on the other hand, is about things. Both Theatre and Journalism seek to present Truth, but it is a radically different truth, one poetic, and one factual.

The first thing an adaptor has to ask is: “How do I take this set of factual truths and distill/arrange them in a manner that results in a poetic truth?” And the second question might be “Who is the antagonist?” In attempting to render the portrait of an entire community this may not be an easy question to answer.

The pre-set of BEAUTIFUL FOREVERS features a giant set of scales center stage. And while we learn the scales are used to measure the weight of recycled materials scavenged by the pickers of Mumbai, and thereby their pay, they symbolize both balance and the search for justice.

Imbalance is often the genesis point of drama — the wrong man is on the throne, there is a plague in Thebes, my kinsman has been murdered — something that causes the protagonist to want to restore balance (or their version of it). BEAUTIFUL FOREVERS features a revenge plot line, a hubris punished plotline, a near tragic injustice plotline, a teen suicide plotline, multiple strong preying on the weak plotlines, multiple corruption plotlines, and so on. Hard to get a cohesive and powerful theatrical event when the Story is so diffuse.

The rampant corruption inherent in this community is also a theatrical difficulty in that corruption is an obstacle to action, it functions as a morass that bogs down anyone with a plan. Further it promotes cynicism a “sophisticated” attitude that serves as a rationale for inaction. “What’s the use if trying, it’s just the way of the world”.

In fact, Congreve’s play is mentioned, but not in this connection — it’s used to illustrate a point about the difficulties of rising in a rigidly stratified social setting. One of the things beautifully presented in this Hare’s thought provoking play is the way in which a thousand years of caste system based on birth has been replaced by a caste system based on occupation.

As Matt Wolf said in his talk on Monday, this is exactly the kind of play the national should be presenting. A large cast, epic on a world theme with an international cast, utilizing all the stage craft the Olivier Stage has at its disposal. There is spectacle and pathos, stage magic and technical prowess on display. This is an ambitious, thought-provoking play that is not always successful as Theatre, but which does succeed in holding up a mirror in which we can see some of the unforeseen consequences of our current way of life. 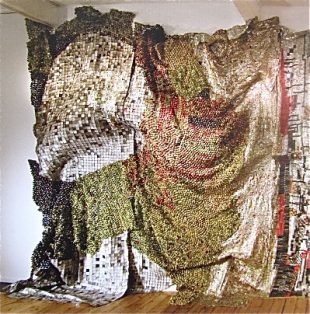 As Wednesday is a matinee day, we had a somewhat limited time for exploring before the performance. Some of chose to visit the October Gallery in Bloomsbury for an exhibit of works by El Anatsui, widely considered Africa’s most acclaimed contemporary artist. Working in found materials, primarily crushed and folded bottle caps, he constructs shimmering, evanescent sculptures and wall hangings. Over the course of a forty year career as both artist and teacher, El Anatsui has addressed a wide range of social, political and historical issues. His works appear in the collections of major world museums including the British Museum, the Metropolitan Museum of Art and the Museum of Modern Art. Even is one has seen pictures of his work, one is not fully prepared for the wondrous effect they produce in person. Amazement. 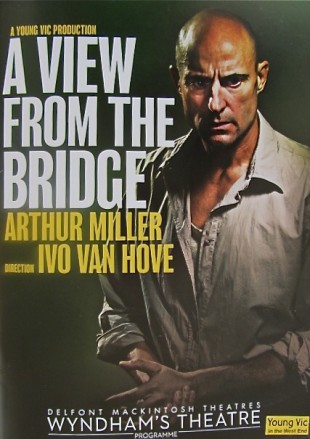 Program cover, A VIEW FROM THE BRIDGE

After a quick bite to eat, we converged on Wyndham’s Theatre in Charing Cross Road for Ivo Van Hove’s smash hit re-imagining of Arthur Miller’s A VIEW FROM THE BRIDGE.

We could all also look forward to a relaxed dinner on Wednesday night. As London theatre’s curtain time is 7:30, one finds oneself sitting down to dinner at 5:30, and even then, one feels a bit rushed. What a treat it will be to sit down to a special dinner and a bottle of wine and plenty of time to savor it