TalkBack Thursday morning gave us an opportunity to explore the ramifications of the re-imaging of a classic play by a visionary director, in this case A VIEW FROM THE BRIDGE in the hands of Belgium born and Amsterdam based Ivo Van Hove.

Upon entering the theatre, we had faced a mammoth black cube on stage, set between to banks of onstage seats, creating a very

unusual theatre configuration — a three quarter thrust within a proscenium. The lights dimmed and the strains of Faure’s Requiem could be faintly heard as the the

massive structure onstage began to rise infinitesimally to reveal two men bathing in a downspout. The rear wall was black and the playing space was a white tile floor surrounded by a u-shaped set of low benches. No painted or constructed scenery, no furnishings — the space was both sleekly modern and somehow ancient — simple, elegant and monumental. 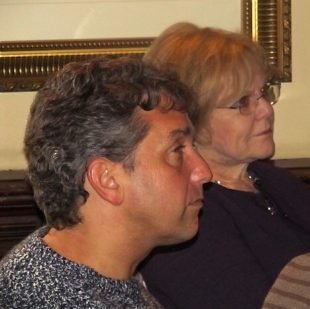 The soundscape continued and, in fact, the entire play was underscored by both composed and found music and sound. With the exception of one brief scene, all the lighting was downlight. Van Hove’s staging placed actors in physically charged groupings. The combination of these production choices resulted in the illusion of the action taking place in compressed, distilled high relief. In short, this production turned its back on the play’s 1950’s Brooklyn setting to emphasize its Greek Tragedy undertones. Van Hove’s pacing is stately, he manipulates our sense of the stage time. At times, the tension and inevitability of the action became almost unbearable. One could see why this production has galvanized critics and audiences alike — AVFTB is heavily represented in the recently announced Olivier Award nominations.

The action of the play is introduced by a narrator, Alfieri, a neighborhood lawyer consulted by longshoreman and protagonist Eddie Carbone. The events of the play have taken place — it is a memory play and, by definition, the action has already been filtered and distilled by one sensibility.

The casting favors the greek tragedy interpretation, with the tall, handsome and muscular Mark Strong a departure from the past Carbone’s who tended to resemble James Gandolfini more than Jude Law. The issue of casting provided us with a lively conversation about the way casting choices change the Story we are experiencing. For instance, the inciting condition in the play is Eddie’s desire for his niece, Catherine. His wife Beatrice addresses his absence from their marital bed.

Usually, Catherine is cast as a demure, virginal young woman who experiences a sexual awakening with Rodolpho, the illegal immigrant harbored in their house. In this production, the casting suggested a little Lolita. Beatrice, often cast in a manner that emphasizes the character’s matronliness, was played by the very attractive Nicola Walker. These choices tell very different stories.
A man whose niece greets him at the front door by throwing herself into his arms and wrapping her legs around his waist does not need his protection in the same way as a young virgin Madonna. A man whose attention has shifted from a wife whose physical charms have faded is different from a man whose wife is still vibrantly sexual.

There are theatre wags who claim that 90% of directing is in the casting. While that seems hyberbolic, casting does have a more telling impact on Story than is generally accepted.

Finally, we discussed the concept of Honor and the flipside of that coin, Shame. The play makes much of the public life of the family in AVFTB. Honor is an attribute constructed for public consumption, an almost third person projection of self into the public consciousness. The failure to maintain personal honor leads to shame. These concepts have largely gone missing from contemporary society, where an pro-forma public apology leads to a pro-forma public forgiveness.

The climax of AVFTB is motivated both by Marco’s honor and Eddie’s shame. Perhaps, that climax is partially responsible for the admiration greeting this production — it dares to reawaken these lost concepts for a new generation, to excite us with the prospect of a world in which there really is consequence.

Following TalkBack, we separated into smaller groups and headed to into the city that Samuel Pepys honored with the quip: “The man who is tired of London is tired of Life.”

Having gone heavy on the capital C culture in preceding days, some of us decided to feed another kind of beast with a foodie trek to Marylebone, one of London’s cozier and most English neighborhoods. 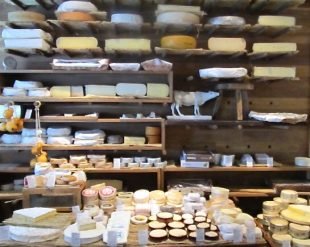 Off the Marylebone High Street, tucked into a short side street, is La Fromagerie, a temple to the art of cheese. The store features both a huge walk-in refrigerator and communal tables where one can sample the wares. There are tasting boards of cheeses curated by country.

We opted for the Iberian board, featuring Manchego, Cabrales, Garrotxa, Tou Dells Tillers and Azeitano, accompanied by a bottle of very delightful Albarino and a platter of charcuterie with saucisson, salame, prosciutto, and duck rillettes. Just saying these words out loud will give you a sense of the hedonistic, sensual and epicurean event that took place.

Feeling sated and slightly ashamed, we headed down Marylebone Lane to one of our favorite shops, Paul Rothe & Sons. Founded in 1945, this fine intimate neighborhood cafe also carries an extensive selection of jams, jellies, marmalades and chutneys. Fig and Rhubarb Preserves seemed to be the order of the day. 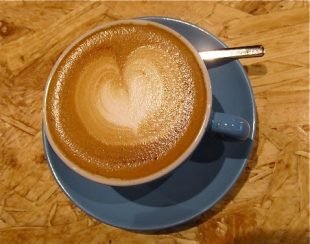 Sensing that a return to a more sober frame of mind might be more appropriate, we popped into Workshop Coffee Company tucked into the corner of a hidden square off Christopher Street for expertly brewed lattes and cappucinos. 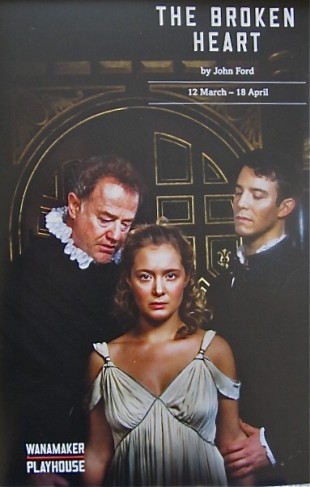 Thursday night we were off to the South Bank again to a production of John Ford’s Jacobean Tragedy, THE BROKEN HEART, presented at the Samuel Wanamaker Playhouse, a reproduction of a Shakespearean era indoor theatre.