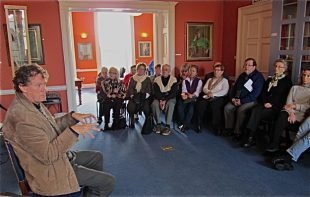 Andrew Hinds discussing his reading of MORNING and AFTERNOON

Today’s TalkBack began with an exploration of stage time — and the way it differs from everyday time. Act I of Tom Murphy’s epic play FAMINE moves at a stately pace that then accelerates as the conditions of the famine worsen. Eugene O’Neill employed this “slowing” device in both LONG DAY’S JOURNEY INTO NIGHT and THE ICEMAN COMETH, as did Peter Brook in THE MAHABARATA. The result, when properly done, is an immersion in the experience rather than an apprehension of the idea of the experience. In Act II of FAMINE, the breakdown of Irish society and the descent into pure animality became absolutely harrowing. The horror that informs the great Greek tragedies or Conrad’s HEART OF DARKNESS was very much evident.FAMINE is not a play about the famine, it is a play of the famine. Murphy accomplishes this not only by slowing time, but also by changing from the usual theatrical paradigm — linear, psychologically normative naturalism — to an epically poetic and primal ritualism. He was very influenced by Brecht and one can see that influence in FAMINE. He has been quoted in interviews, saying: “I want to create the feeling of life, which frequently isn’t linear or logical or reasonable”. We were fortunate to see this rarely produced play, and it’s clear why Murphy is considered one of Ireland’s leading playwrights. 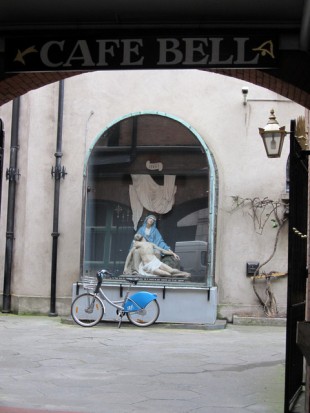 The TalkBack was followed by Andrew Hinds’ reading of his latest work MORNING and AFTERNOON, two related one act plays that he is preparing for presentation in Edinburgh, London and possibly the US. The plays, which tell the story of a pair of brothers, are intensely felt confessions that deal with the pressures families experience in a society where opportunity is in short supply. Still, by the end of AFTERNOON the audience is left with a sense of hope that is realistic and hard earned. Andy’s visits with us every year are certainly among the highlights of the Tour.

Friday was bright, blue, and mild — a perfect day to stroll south of the Liffey to St. Stephen’s Green. The Green is a 22 acre park in the middle of a Georgian Square, located at the south end of Grafton Street, Dublin’s main pedestrian shopping street. Landscaped to its current design in 1880, it features memorials to writers, famine victims, and heroes of the struggles for Irish Independence. During the Easter Uprising of 1916, insurgents seized the park and dug defensive positions. A ceasefire was called during the hostilities so the groundskeeper could feed the ducks. With the great light on Friday, it was a perfect day for capturing Dublin’s picturesque streetscapes on film.

Friday night found us once again in Temple Bar, at the Project Arts Centre, for the world premiere production of THE TALK OF THE TOWN. Emma Donoghue, author of the Booker Prize-nominated novel ROOM, returns to the theatre to tell the story of Maeve Brennan, the daughter of the first ambassador of the Irish Free State to the US. When the family was recalled from Washington, Maeve moved to New York where she took the literary scene by storm, becoming a fixture at THE NEW YORKER. 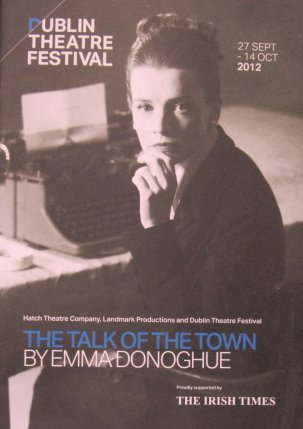 Program Cover, TALK OF THE TOWN