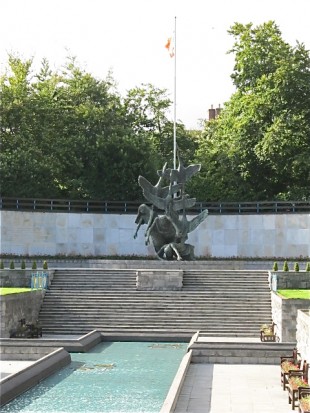 The Garden of Remembrance

The world premiere of a new, original work from Frank McGuinness has been one of the most anticipated events of the theatrical season in Dublin. McGuinness, one of Ireland’s leading contemporary playwrights is a prolific adaptor of classic plays from the Greeks to Ibsen to Chekhov, but it’s been almost ten years since we’ve seen a new work from the writer of acclaimed plays such as OBSERVE THE SONS OF ULSTER MARCHING TOWARDS THE SOMME and SOMEONE TO WATCH OVER ME.

THE HANGING GARDENS, is a family play set in the garden of a famous writer’s house. The play opens with a striking coup de theatre in which the lead character Sam, in his pajamas, glories in a elemental drenching of an onstage downpour. Immediately, we have an allusion to Lear on the heath, and McGuinness’ immersion in the classics is very much in evidence throughout the play. The language is poetic and dazzling as Sam and his family struggle with his approaching and increasing dementia.

The set, also, was filled with allusions, from the autumnal palette to the repeating sunset motifs. The garden itself is a metaphor for the act of creation — a created world that alludes to the natural world — just as a story is a created world. More than once acts of creation are enacted in front of us as the writer spins out ex-tempore tales. 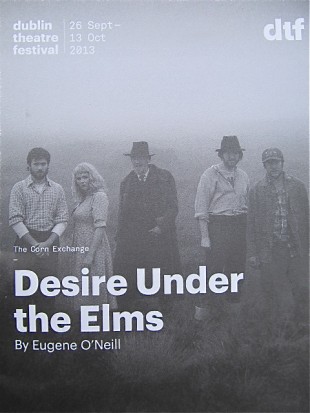 Program Cover, DESIRE UNDER THE ELMS

A good part of our discussion was given over the connection between our identities and our command over words, not only as a way of projecting our persona, but also as the basis for that most human of activities — connection. Sam’s loss of words is both terrifying to him professionally, and isolating as an individual.

The dramaturgy of the play is very Greek — there is not much in the way of resistance to what is going to be said. This family is not inhibited, and they download their thoughts and feelings, from the excoriating to the tender, freely.

THE HANGING GARDENS is the work of a mature writer, unafraid of reaching for the overtly poetic – and attaining it. It explores the process of creation in a compelling and intelligent manner. And it features a superb performance from Niall Buggy, one of Ireland’s truly great actors.

Wednesday being our matinee day, there wasn’t much time to visit attractions between TalkBack and the show — DESIRE UNDER THE ELMS, Eugene O’Neill’s classic re-imagining of the Phaedre myth, transposed to an 1850’s New England farm, presented at the historic Smock Alley Theatre. 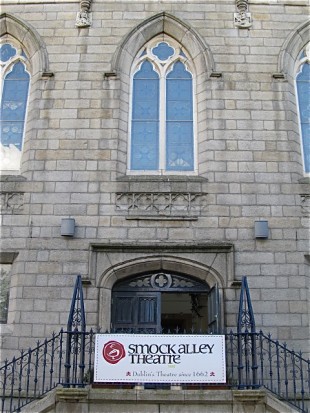 From our meeting place at the Irish Writers Centre, some of us went next door to the Hugh Lane Gallery, which features not only an extensive collection of modern works, but also the entire contents of Francis Bacon’s studio reconstructed as it existed on the day of his death.

Also close by is The Garden of Remembrance, dedicated to all those who lost their lives in the fight for Irish freedom. One enters this quiet urban park and immediately descends a flight of stairs, effectively separating the garden from the surrounding streetscape. The garden is dominated by a long reflecting pool leading to a raised platform with a monumental sculpture of swans escorting an Irish warrior to the afterlife. A powerful, poetic and thought provoking memorial.

After the matinee, we gathered at Il Baccaro, a very atmospheric Italian restaurant set in a vaulted underground chamber just off Meetinghouse Square, for our one group dinner of the week. We sat down at 6:00 and got up at 10:30, having put ourselves on the outside of quite a number of carafes of the house red. Truly, a warm and convivial time was had by all. 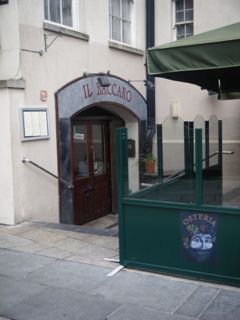