Hailed by critics as an “an Our Town for our time,” this play is by turns poetic and comic, romantic and philosophical. Peter returns to his twenty-year high-school reunion with dreams of winning back Kari, the girl he left behind after an unexpected pregnancy ended their relationship. Standing in Peter’s way is Kari’s bitter-as-ever resentment, her husband and the fact that Peter still hasn’t grown up. As the night progresses, both Peter and Kari are led, through their interactions with a host of characters all played by a virtuosic Narrator, to face the consequences of choices made long ago and start back into life with newfound strength and bittersweet resolve. 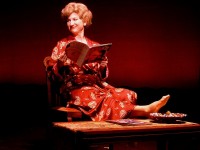 On a chilly night in East London, schoolteacher Kyra Hollis receives an unexpected visit from Tom Sergeant, Kyra’s one-time boss and long-time lover. After the painful (and unresolved) dissolution of Tom and Kyra’s relationship, the pair have pulled away from each other physically, emotionally, and ideologically, as Tom continues to focus on his business ventures and Kyra donates her time to teaching the underprivileged. Tom and Kyra grapple with each other, moving between tender passion and vicious political polemics, as the night darkens and the lines between past and present begin to blur. Skylight is a complex, thought-provoking, and remarkably timeless drama about power, politics, and passion.