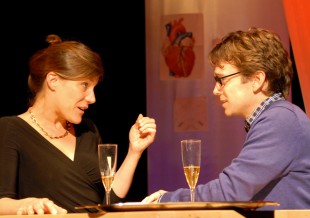 Sometimes, when you work in theatre, the rare treat is to see a production without working on it. So often, when we’re in the midst of the process of rehearsing and producing a show, we lose the ability simply to sit back and take in what’s in front of us. This past Thursday, I was lucky enough to have that opportunity with Animals Out of Paper.

If you read my earlier post about the play, you know I was at the first rehearsal, when the actors read through the script together for the first time, and when Tom Hull came to share his knowledge and passion about origami with the company. Since then, I hadn’t had much chance to see anything–largely because I’ve been involved in my own rehearsals for The Swan. I stopped by one rehearsal a few days before opening, but that was for about fifteen minutes, to take some rehearsal photos.

On Thursday night, I went with the cast of The Swan to opening night. I took my seat without all the knowledge and questions I bring to work I’ve been directly involved with. We know the artists involved–some are new friends, some we’ve known longer–but we didn’t know anything about rehearsals since that first day,we hadn’t been around for design and production meetings, and we hadn’t been to the dress rehearsals or previews. In the afternoon, we’d been director, actors, stage managers working on a play; now we were audience.

I’ve read the script before, when I was helping Byam work through season selection, and I had heard the actors–Elizabeth Rich, Chad Hoeppner, Vandit Bhatt–read it at the first rehearsal. Now I got to see what they and their director, May Adrales, had made and discovered.

What a treat was in store for us! If you haven’t seen the production yet, you absolutely should. I was proud of our theatre company, and of the actors doing such terrific work in front of us. Most of all, however, I was an engaged audience member–following the ups and downs, the comedy and the emotion, the disappointments and hopes of the characters in front of me. The play was as funny as it had seemed when I read it, and even more moving.

I don’t know what they did in rehearsals, in design meetings, in technical rehearsals, or in previews. And you know what? Ignorance was bliss.