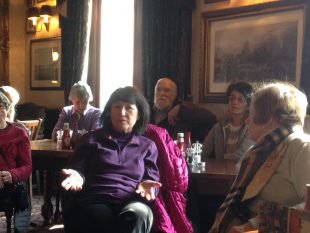 Talkback at the Swan

If you’ve always wanted to see Sir Kenneth Branagh hop around the stage with his pants down around his ankles, then The Painkiller was the play you’ve been waiting for. We gathered at The Swan for our conversation about this contemporary French farce by Francis Veber, starring Kenneth Branagh and Rob Brydon. Many of us shared what in the play we had found funny, as well as what we had not. We pieced together the elements of farce, and which were present and missing in the play we saw.

Daniel attempted a demonstration of precision in comedy–exploring a moment when Rob Brydon’s character accidentally picks up a rifle, believing that he has picked up a camera tripod–which made clear that he probably understands a great deal about comedy, and that it’s good he casts other people to do it. (We also learned a lot about each others’ senses of humor, and what makes each of us laugh.) 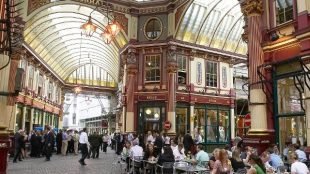 Plans for the day included a walk to various outdoor markets. The marvelous Leadenhall Market, a vaulted Victorian marketplace inside the City of London Square Mile is one of the most picturesque locations in the city. (It should also be a familiar sight if you’ve ever watched the Harry Potter movies.) One way to go is to walk from Leadenhall, across the Tower Bridge, to Borough Market on the south side of the Thames. The sun invited us out to this and many other walks.

In the evening, it was off to the Almeida Theatre, one of the most ambitious and successful companies in London, for Robert Icke’s production of Uncle Vanya.