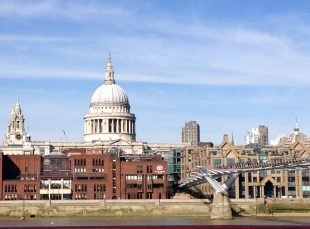 A favorite plan for many tour-goers combines a visit to St. Paul’s Cathedral and a trip to the Tate Modern. St. Paul’s is a straight shot on the Central Line from our hotel–and the tube stop is directly under our building! In some ways, the most amazing thing about St. Paul’s is that there has been a church dedicated to Paul on that same hilltop since the early 7th century–when it was in the former Roman settlement of Londinium.

That building burnt down and was rebuilt before the end of the century. That replacement was itself destroyed by the Vikings. The next lasted much longer, but again suffered in a fire. It was replaced by the Normans–who set out to build the largest church ever–in the 13th century. Its spire, which at the time made it the tallest building in the world, collapsed in 1561, after a lightning strike. The entire cathedral was famously destroyed in the Great Fire of London in 1666. Christopher Wren designed the current building, which was declared complete in 1711, after 35 years of building! 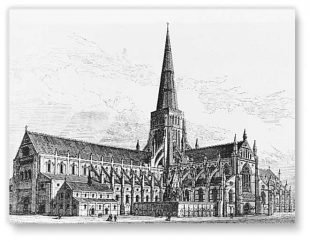 During the Blitz, in World War II, Winston Churchill declared that St. Paul’s must be saved. And it was. The 1500 year line of buildings on this highest point in London is remarkable to contemplate.

From St. Paul’s, it’s a short walk to the Millennium Bridge (opened in 2000). You cross the Thames with the Tate Modern in front of you, and Shakespeare’s Globe not far to its left. The collections at the Tate Modern–not to mention rotating exhibits–are an immersion in modern and contemporary art. (It’s worth mentioning the presence of contemporary art in St. Paul’s itself, including a video installation by Bill Viola.) A particularly notable current exhibit at the Tate Modern is a room of photographs by Simryn Gill, taken in her native Malaysia, called A Small Town at the Turn of the Century. In a play on the idea of exoticism, each photograph superimposes a fruit over the head of someone engaged in everyday life.

Our day began with another wonderful introduction to London theatre from Matt Wolf. (You can learn more from last week’s entry here.) In the evening, we headed to the beautiful Apollo Theatre for our first play of the week, Nell Gwynn by Jessica Swale, starring Gemma Arterton.