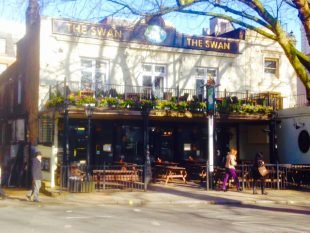 Okay, we’ll get to Prince Charles shortly. But don’t skip ahead.

We began our first true theatre day at the Swan, a marvelous pub one block down Bayswater Road, where we gather each morning on the second floor to talk about, you guessed it, theatre. On our first morning, we welcomed Matt Wolf. Matt is the London Theatre Critic for the New York Times, and a critic for many other publications as well. He also teaches in the London programs of both NYU and Syracuse University. In other words, Matt does a great deal of bringing knowledge of English theatre to Americans, and we are lucky to have him. 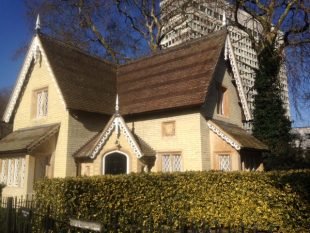 Buckhill Cottage in Kensington Gardens, with Lancaster London Hotel in the background

Matt talked from a deep well of knowledge regarding the London theatre scene, each of the theatres we are attending, and the individual artists involved. His ability to make connections across these different productions was enormously impressive, and his way of sharing his knowledge is always inviting. We came away from his talk more excited than ever about the plays we’re going to be seeing, and with a deeper background for thinking about what we see. 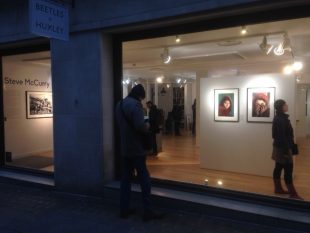 The day began in beautiful sunshine, and many travelers took full advantage. It was a day of walking for some–through Kensington Gardens and Hyde Park, in neighborhoods, from gallery to gallery in Soho. Some tour-goers went to an exhibit at Beetles + Huxley Gallery of work by Steve McCurry, a photographer best known for his famous portrait of an Afghan girl in a refugee camp. The photographs, in large prints, cover his work in Afghanistan, India, Burma, and elsewhere, and give evidence of a career spent opening up new worlds to western viewers.

In the evening, we gathered at the Apollo Theatre for our first play of the trip: Nell Gwynn, by Jessica Swale. The play premiered last summer at the Globe Theatre, and has now transferred to the West End in a commercial production. Oh, and Prince Charles was there, along with Lady Camilla. Now here’s the really interesting thing. Nell Gwynn was famous as, among other things, the mistress of King Charles II. And there in the audience was Prince Charles–the possible King Charles III–with his wife, who was formerly famously his mistress. Astonishing. He must have been warned, right?

Tomorrow morning, we’ll meet back at the Swan for our first Talkback of the tour!