Following another Lancaster London Hotel breakfast that couldn’t be beat, we gathered upstairs at the Swan for our first true Talkback of the trip. Daniel started us off with a reminder that–as much as the Matt Wolfs and other theatre critics of the world know about theatre–theatre isn’t made for them, but rather for the rest of us. As a result, it’s vital for us to trust ourselves in seeing and talking about the work. We also want to start from observation, from what we saw and heard. Those details can open up for us so much, and hearing each other’s observations enriches our own experience. 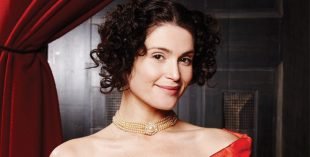 Nell Gwynn is about many things, including theatre itself. (The comedy contains a sort of condensed theatre history, focused on the return of public performance in London in 1660 following the restoration of the monarchy in the person of King Charles II. Not long after public performances began, women started to perform on stage–which they had not done in Shakespeare’s time. This transition was complex, and has served as source materials for earlier plays as well, including Jeffrey Hatcher’s Compleat Female Stage Beauty.)

Tour-goers discussed how the theatre we were in (the beautiful Apollo Theatre) itself became a part of the world. In fact, the play’s prologue turns out to be an apparent rehearsal in a theatre, and the stage as often as not represents itself: a stage. It also represents the royal court–and the suggestion is that both locations call for performance, and perhaps dissembling. We talked about the character of Nell Gwynn, who starts the play as a fruit-seller (& former prostitute), and becomes an actress, then the mistress of the King. One interesting focus of our conversation was how (or whether) she changes as a character over the course of the play, and what aspects of her character seem constant. 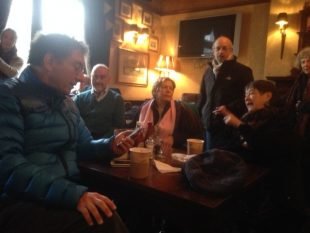 Tour-goers at the Swan, just before our first Talkback.

Much of the comedy in the play is very broad, with knowing jokes based on our contemporary perspective, and long takes to the audience (as well as a shameless appearance by a puppy, more specifically a King Charles Spaniel). Nell herself is established as a proto-feminist, with an often very contemporary point of view.

We also talked about the magnetic performance of Gemma Arterton in the title role. The sense of pleasure and confidence coming from her was vital to the success of the evening. This is particularly interesting as she took over the role for the West End transfer, after it was originated last summer by Gugu Mbatha-Raw. 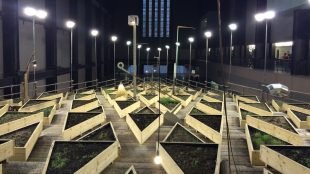 Following the Talkback, tour-goers went off to enjoy the day in London. One popular destination was the Tate Modern. (We were already headed across the river to the Old Vic for the evening.) Current exhibits include an installation in the enormous Turbine Hall called Empty Lot, by Abraham Cruzvillegas. As the Tate describes the work: Empty Lot is a large geometric sculpture created using scaffolding, a grid of triangular wooden planters, and soil collected from parks across London including Peckham, Haringey and Westminster. Nothing will be planted in the soil, but it will be lit by lamps and watered throughout the six month display. The unpredictable nature of the work, which may grow and change from one week to the next, provokes questions about the city and nature, as well as wider ideas of chance, change, and hope.

The Tate Modern is also showing an enormous exhibit of Alexander Calder’s mobile sculptures and related work, as well as an exhibit on the act of performing for the camera.

In the evening, we gathered at the Old Vic to see Ralph Fiennes in Matthew Warchus’s production of The Master Builder, by Henrik Ibsen. Without giving anything away, it’s safe to say we will have no shortage of topics for conversation in the morning!