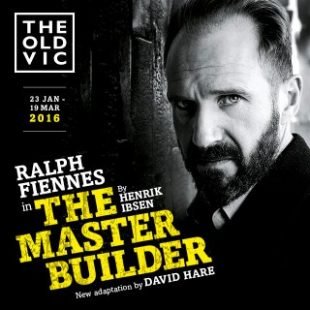 We began another London morning at the Swan, gathered to discuss the previous night’s production of Henrik Ibsen’s The Master Builder at the Old Vic. The production was directed by the Old Vic’s new Artistic Director, Matthew Warchus, and the lead role was played by Ralph Fiennes. The play itself occupies a complicated spot in the trajectory of Ibsen’s writing. After a start as a writer of verse dramas–often about Vikings, Ibsen became known for deeply realistic plays that often addressed both individual psychology and larger social issues. Plays like A Doll’s House or An Enemy of the People explored realistic circumstances, and how people struggled within them to create meaningful lives.

Toward the end of his writing, in plays like When We Dead Awaken, Ibsen’s work became much more explicitly symbolic, freighted with more fragmented and often less “realistic” dialogue and even events. The Master Builder probably lives somewhere in the trajectory from Ibsen’s more realist works and his late symbolist writing. As a result, each production must find its own balance of those two elements or impulses–engaging us with each while discovering how to let both aspects have their effect on us.

From the opening visuals, our tour-goers found themselves immediately engaged in symbolic thinking. The playing area was a wooden disc, surrounded by gravel. On a slant above it there was an enormous oblong wooden form, perforated with openings of varying shapes. Hanging down around and behind the playing area were thickly arranged shards of wood, coming close to but not quite reaching the ground. The furniture itself, and the props, are realistic–if large and often dark.

In the play Halvard Solness–the Master Builder–is a man of great prestige and power in his town, a self-taught builder who never studied architecture. He and his wife Aline are deeply alienated from each other. (One of our tour-goers, a physician, pointed out that she seems clearly to suffer from untreated depression, and that their marriage exhibits precisely the traits one sees in such circumstances.) They each carry guilt from an incident in their past. Into their home walks Hilde Wangel, a young woman who claims that Solness made a promise to her when she was thirteen, and that she has come to collect. The play featured an international cast, with American Linda Emond as Aline, and Australian Sarah Snook as Hilde.

In our discussion, we were struck by many of the visuals, including bookcases that reached toward the sky in Act II, and a misty outdoor scene for Act III. The play also concluded with something of a visual coup de theatre. In other words, the symbolic nature of the play was heavily emphasized in this production. 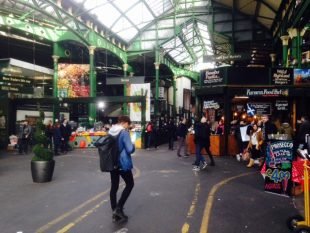 After our Talkback, we had a shorter stretch of time than usual, because we were headed to a matinee production at the Garrick Theatre on the West End. Kenneth Branagh has created a one year theatre company at the Garrick, where we were headed to see The Painkiller, by French playwright Francis Veber. Some of our tour-goers took the time before the play to visit Borough Market, a marvelous and popular outdoor market on South Bank, with vendors selling all sorts of produce, cheeses, and prepared foods.

Following the matinee, many in our group took the opportunity in the evening to go see other productions. We heard marvelous reports about both The Solid Life of Sugar Water in the temporary theatre at the National, and The Magic Flute staged by the remarkable director Simon McBurney for the English National Opera.