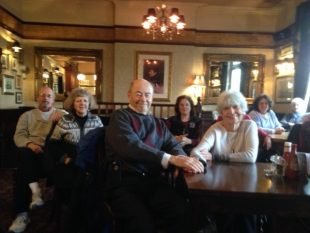 Friday talkback at the Swan.

Last night’s production of Uncle Vanya at the Almeida Theatre prompted one of our most thorough discussions. Tour-goers had a range of takes on director Robert Icke’s visual choices. All agreed, however, that the depth of the acting we saw was remarkable. The Almeida is a relatively small theatre, seating a little over three hundred. Many major productions have come out of the Almeida recently, including the recent Broadway production of King Charles III, and an apparently quite stunning production of The Oresteia.

One of our primary topics in conversation was the elasticity of stage time. Having seen a farce prior to Uncle Vanya, we had fascinating contrasts regarding how time can work in a play. Whereas a farce never wants to let up, this production of Uncle Vanya opened up time, allowing us to live in the space and time the characters themselves experience. Many in our group were astonished to learn that we had seen some of these actors in other–quite different–roles, as they were so transformed here. 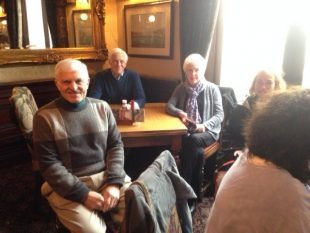 Talkback at the Swan

Some of our tour-goers walked across Kensington Gardens to the Victoria and Albert Museum in South Kensington. One of the current exhibits there is “Curtain Up: Celebrating 40 Years of Theatre in London and New York.” The exhibit explores the back and forth between London and New York theatre, and there is a guided tour each day at 2pm.

In the evening, we headed to the Park Theatre–a very new theatre in the Finsbury Park neighborhood–to see a new play: The Patriotic Traitor. This play has actually made the news earlier this week, when one of the actors–after being heckled–cursed at an audience member and refused to finish the show. Happily, that did not happen at our performance.