Over the weekend, we had a changing of the guard here in London. Group one completed their stay, while Group two arrived to begin their week of theatre-going. The weather was kind to everyone involved, with more and more sunshine, inviting us to parks and neighborhood walks. 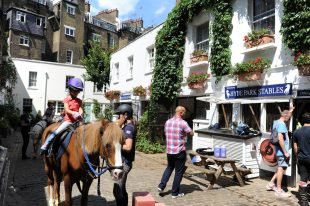 One of the joys of London is stumbling onto neighborhoods, or finding an open market, or strolling a cobblestone mews. Around our hotel, each mews is full of beautifully renovated homes in what were once stables, etc. Of course, there are also actually stables–the Hyde Park Stables, offering rides in Hyde Park.

On the last night of week one, a number of theatre-goers went out for one last play. Some went to the National Theatre for August Wilson’s Ma Rainey’s Black Bottom, and others saw the closing performance of Caryl Churchill’s Escaped Alone at the Royal Court. Some of us gathered for a drink afterwards here at the Lancaster London Hotel.

Sunday morning was our true changing of the guard. Those flying with Chester Theatre were up early, collecting their breakfast before our private bus came to take them to Heathrow. Two hours or so later, another private bus pulled up to the hotel, and week two had begun!