What allows a group of actors to work together? To explore and trust each other, and to make space to let the audience into the experience? 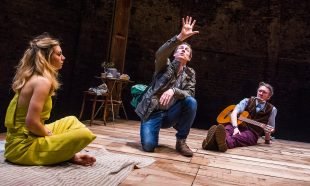 A scene from Uncle Vanya at the Almeida

We found ourselves talking a great deal about acting as we discussed the Almeida Theatre’s production of Chekhov’s Uncle Vanya, directed by Robert Icke (a rising–perhaps risen–star on the London theatre scene). The cast of eight offered some of the very finest acting work we have seen on this trip, and some of the best of any trip. We saw a deep commitment to the play, to the story, and to the characters from actors including Paul Rhys, Tobias Menzies, Jessica Brown Findlay, and Vanessa Kirby. Psychological honesty and remarkable technique came together.

(Many in our party were surprised to discover that the actress playing Sonya–Jessica Brown Findlay–was actually known to them as Lady Sybil from Downton Abbey. Her overwhelming earthy plainness in this production was in stark contrast to her image in that show.)

At the same time, director Robert Icke made a number of choices that allowed the actors to do this work, and to trust that we in the audience would have access to it. A stage that at times revolved–very slowly–permitted great stillness on the part of the actors. The three ten minute intervals–one between each act–assured them and us the chance to immerse ourselves without ever going too long without a break.

Saturday, our last full day in London, provides tour-goers the opportunity for a longer day trip, or an additional play. Plans included everything from a concert at St. Martin in the Fields to trips out to Chichester Cathedral.

In the evening, many of us gather for a final drink to celebrate our week in London.