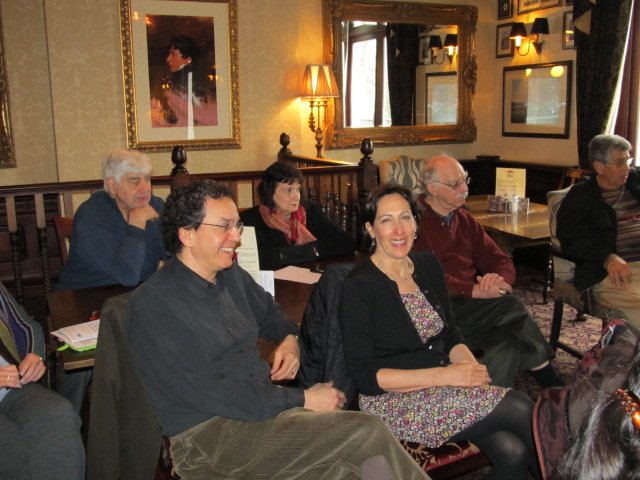 As always, our London week has flown by and we found ourselves Saturday morning at our last talkback — for SHE STOOPS TO CONQUER. Oliver Goldsmith’s warm-hearted comedy represented a radical departure when it was first produced in 1733. The comedy of the time, known as Sentimental Comedy, was based on the belief that mankind is basically good and that virtue will be rewarded (think the Cosby Show). Goldsmith, an Irishman living in London, believed that these comedies showed the characters “as they were meant to be, not as they are.” His sense that a truer brand of comedy should be grounded in human fallibility has become the accepted basis for most modern comedy dramaturgy.

In the case of the richly produced version at the National Theatre, the director seemed to have lost sight of Goldmith’s aspiration and the result was a lightweight and generally agreeable production that featured a very broad acting style.  Also on display was  a great deal of the Olivier Theatre’s production magic — revolving, flying, sinking and rising scenery, fog, smoke, a working fireplace, evocative lighting and sensurround sound provided a feast for the eye and ear.

Board Member Gail Perlman followed up the play discussion with a recap of last November’s Drama for Dinner event before inviting the group to participate as either hosts or guests for the 2012 version.  Byam Stevens gave a preview of the 2012 Summer season — four plays on the theme of UNCOMMON LOVE STORIES, before yielding the stage to an unexpected but very witty musical appreciation of the 2012 London Theatre Tour delivered John Joelson.

The balance of Saturday was open, so we dispersed in various directions, with people headed to Cambridge by train, to the West End by tube and bus (many heading for MATILDA, the musical that has garnered 10 Olivier Award Nominations), and on foot to Marylebone’s Wallace Collection — a wonderful gallery featuring a multitude of paintings and one of the world’s foremost collections of armor.  As the week opened with THE MADNESS OF GEORGE III, it was a fitting way to end the week with the knowledge that David Haig had, indeed, been nominated for an Olivier Award for Best Actor.