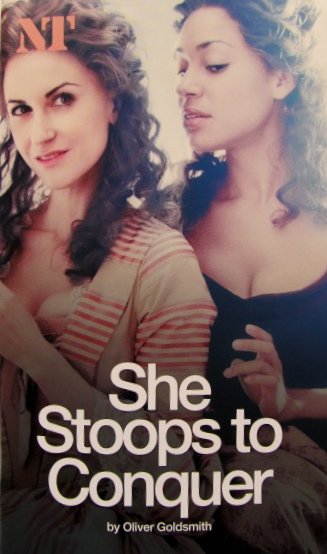 Program cover for She Stoops to Conquer

The Friday morning talkback was very lively as befits the antic, vivid and inventive production of A MIDSUMMER NIGHT’S DREAM we had seen the night before at the Lyric Hammersmith. Once again the creative energy came from a collective — Filter Company — rather than a single playwright. Filter, known for its inventive use of sound design and a very muscular approach to theatre, especially comedy, has found a home at the Lyric. And, if as Lysander would have it: “The course of true love never did run smooth,” then Filter’s clever, hip re-imaging of Shakespeare’s romance focused less on the “true love” part than on the “never did run smooth” angle. Putting the Mechanicals at the center of the production, the company let slip the dogs of comic chaos, and truly no one was safe, including the audience, who took great relish in the full participation food fight. The talkback concluded with the widely shared feeling that had Will come back to see this production, he would have approved.

After five days of unseasonably warm and dry weather, Friday presented something more usually British in the climate department. But the cool temps and grey lowering skies made good walking weather in a great walking town, and some of us trekked over half of central London, past Wellington Arch, by Buckingham Palace, through St. James Park, across Horse Guards Parade, up Whitehall, slipping by Trafalgar Square, down to the Embankment over Hungerford Bridge, up the South Bank and back to the National Theatre for a revival of Oliver Goldsmith’s 1733 classic comedy, SHE STOOPS TO CONQUER. 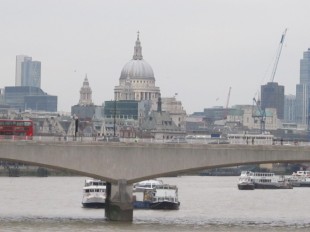