We touched down in Dublin just after dawn, and were checked into the historic Gresham Hotel by 7:30. After a wonderful Irish breakfast and a bit of downtime, we were off to a free concert at the Hugh Lane Gallery.

The concert was the fourth in a series presenting the complete Haydn piano sonatas. Peter Tuite, the Dean of the Royal Irish Academy of Music, shared four sonatas in a gracious, sensitive, and witty performance. What a pleasure to shed the kinks of overnight international air travel and to be transported into the world of a musician who spearheaded the transition from the baroque to the classical era —  a world of emotional depth, invention, wit, profound spirit and humor all held in sophisticated balance. A world in which one could, for however brief a moment, lose oneself. 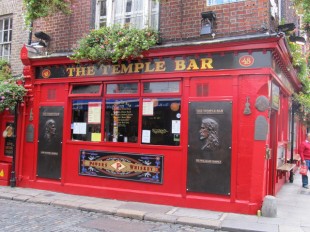 After the concert we walked down O’Connell Street, one of the broadest avenues in Europe, crossed the river Liffey into Temple Bar, and continued along the cobbled streets to the National Photographic Archive, a branch of the National Library. The NPA is home to over 600,000 images, which the curators draw on to create consistently fascinating exhibitions in their intimate gallery on Meeting House Square. The current exhibition, TAKING STOCK, pulls together highlights from previous shows. Among the fifty or so images, dating back as far as 1870, are truly captivating ones that capture the Irish love affair with trains, the pain of their struggles for freedom, the beauty and hardship of the hardscrabble country life, the grit and humor of Dublin streetscapes, and even portraits of two theatrical giants – Samuel Becket and Noel Coward. 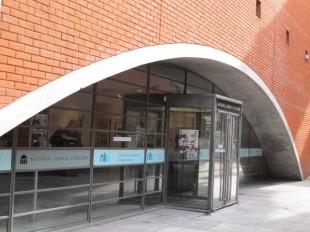 Leaving the NPA, we crossed the unique outdoor performance space that is Meeting House Square for a coffee in the Irish Film Institute’s skylight covered courtyard cafe — a soaring, yet congenial brick clad industrial space that has been repurposed to house a number of screening rooms, a small book and DVD store, and the cafe.

In the evening we gathered at the Gresham’s Writers’ Lounge (the lobby spaces at the Gresham are largely unchanged since the 1920’s — and they’ve served as the setting for a number of movies including MICHAEL COLLINS) for a quick glass of wine before heading in to our Welcome Banquet. The dinner was highlighted by welcomes from CTC Board Member Gail Perlman, who promised that participants would enjoy the coming exercise of both mind and heart; Capital Repertory Theatre (CRT) Board Member Howard Reade, who updated the gathering on key baseball playoff and football scores; 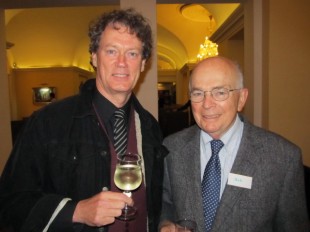 CRT Artistic Director Maggie Mancinelli-Cahill, who shared her excitement about the collaboration between the two organizations, not only on the tour, but on the current co-production of Daniel Kramer’s Pride@Prejudice; and finally CTC Artistic Director Byam Stevens, who observed that humans are complex organisms that need a special range of care and feeding and that the week ahead was an opportunity to feed that often neglected side of ourselves, the side that aspires, that responds to the work of the great artists through the ages — fittingly he ended a terrific banquet with a “Bon Appetit!” wish for the “feasts” to come.