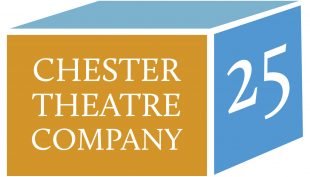 CHESTER, MA (July 3, 2014) – Chester Theatre Company celebrates its 25th Anniversary Season with a special production of the one-woman comedy HIGH DIVE by Leslie Ayvazian. The production, which runs from July 22nd through July 24th at the Chester Town Hall in Chester, MA, will feature CTC favorite Jennifer Rohn in her sixth CTC appearance.

In HIGH DIVE, comic misadventures pile up as Leslie, perched on a high dive platform, flashes back to the succession of farcical disasters that culminates in her present predicament. HIGH DIVE is a one-woman show with a very large cast — the other actors? The audience, who are invited to read lines from the script, and thereby experience the point of the play – the willingness to take risks and dive in. According to the NY Daily News, “HIGH DIVE is well worth the plunge. This brief and light-hearted look at Ayvazian’s misadventures… is an engaging and often hilarious show from beginning to end.”

“I couldn’t think of a better way to involve our audience in our 25th Anniversary celebration than with HIGH DIVE, Leslie Ayvazian’s remarkably brave, innovative and fun theatre piece,” said CTC Artistic Director Byam Stevens. “Brave, because it takes incredible courage for an actor to work with 35 strangers every night. Innovative, because of it possesses a unique structure with its scripted lines for audience members. Fun, well, because it’s fun! Audience members who want to take part should come 15-20 minutes early to be “cast” by Jennifer (Rohn) in the lobby. They’ll be given sides (their lines) and direction – then the fun begins! This is truly not to be missed!”

HIGH DIVE’s July 23rd performance will be followed by a champagne reception in recognition of CTC’s 25th anniversary. The July 24th performance is CTC’s donor appreciation night; tickets will only be available to “Friends of CTC.”

Leslie Ayvazian (Playwright)is an award-winning playwright and actress. She is the recipient of the Roger L. Stevens (1994) and the Susan Smith Blackburn Prizes (1996) for her work Nine Armenians, which was produced at Manhattan Theatre Club. She also received a fellowship from the New Jersey Council of the Arts and assistance from the New Harmony Writers Project in developing this play.  Her works have been produced Off-Broadway and at major regional theatres. Most recently, the Atlantic Theatre Company produced her play Make Me as part of their 2008-2009 Stage 2 season. Ms. Ayvazian is currently an adjunct professor at the Columbia University Graduate School of the Arts Theatre Department.

James Warwick (Director) has now directed over 40 productions in US regional theatres. He has served as associate artistic director at both Chester Theatre Company and the Berkshire Theatre Festival. In 2007, Mr. Warwick was appointed Interim President of AADA in Los Angeles and in 2009, President of Theatre of Arts in Hollywood, two of the oldest drama schools in the US. For CTC, James Warwick has directed Madagascar, Retreat From Moscow, Duet for One and Skylight. As an actor, Mr. Warwick has played several leading roles in London’s West End and starred in many filmed series for BBC Television and PBS Masterpiece Theatre. In 1995, Mr. Warwick toured America as Arthur in Camelot, followed by Sir Robert Chiltern in Oscar Wilde’s An Ideal Husband on Broadway.

Tickets are available on CTC’s website: www.chestertheatre.org, or by phone at 413­354­7771. To receive a brochure, contact the CTC office at 413­354­7770. CTC’s performances take place at Chester’s Historic Town Hall, 15 Middlefield Road, Chester, MA.Performances of HIGH DIVE are July 22nd-July 24th at 8:00pm.Tickets are $35 for the July 22nd and 24th performances. Note: must be a Friend of CTC to attend July 24th performance.To become a Friend of CTC, call 413-354-7770. Tickets to the July 23rd performance are $50 and include a special champagne reception. Group rates for 10 or more are available to July 22nd performance.

Chester Theatre Company, a professional theatre company located in the foothills of the Berkshires, produces 4 plays each summer, performed by top-flight actors, directors and designers from across the country.Under the leadership of Artistic Director Byam Stevens, CTC has earned a reputation for producing the best in contemporary theatre — 17 CTC productions have gone on to Off Broadway, regional, national, and international engagements in the last 17 years.
CTC’s season sponsor is Roscoe’s Restaurant. CTC’s other corporate sponsors are Baystate Health, Esselon Café, Harvest Moon Realty, Morgan Stanley, New England Pubic Radio and Valley Advocate/Preview Magazine. CTC performances are supported, in part, by the Massachusetts Cultural Council and the Local Cultural Councils of Blandford, Chester, Huntington, Montgomery, Washington, Westfiled and Worthington.