CHESTER, MA – Chester Theatre Company will present three Special Events from July 23-25 at the Chester Town Hall in Chester, MA. The series opens with MERCY KILLERS, Michael Milligan’s deeply moving love story that explores the consequences of our current health insurance system. Next up, TEA FOR THREE: LADY BIRD, PAT & BETTY starring Elaine Bromka returns to CTC after a triumphant Off Broadway engagement. The series closes with a staged reading of JANE EYRE: A MEMORY, A FEVER, A DREAM, Daniel Elihu Kramer’s new adaptation of Charlotte Brönte’s classic romance. Kramer’s inventive adaptation of Pride and Prejudice was a hit in CTC’s 2011 season.

“I wanted to share each of these wonderful theatrical events with our audience, so we decided to put in a week of special event programming in the middle of our season,” said CTC Artistic Director Byam Stevens. “Each of the artists behind these projects has a history with CTC as an actor or writer or both, and we are thrilled to welcome them back!” 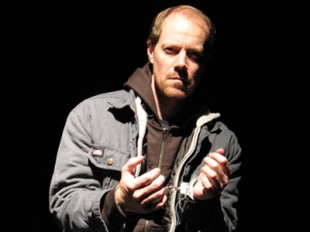 How can we cure our ailing health care system?

This is the question asked by Michael Milligan’s critically acclaimed one-man show, MERCY KILLERS, to be presented at CTC on Tuesday, July 23 at 7:00pm. Written and performed by Milligan, the play tells the story of Joe, a proud American whose patriotic passions for life, liberty and the pursuit of happiness are turned upside down by his wife’s cancer diagnosis.

Milligan has toured MERCY KILLERS extensively in the United States generating debate and discussion. As is the case with every performance, the CTC performance of MERCY KILLERS will be followed by a panel discussion with health care advocates and experts.

Recently Milligan gave a unique performance for the Minnesota House of Representatives. Following the performance, State Senator John Marty was moved to say, “In this painfully accurate portrayal of the struggles of one couple, Milligan makes public the suffering that thousands of American families experience in private. I was inspired by the performance, and energized to move our state from health insurance for some, to health care for all.”

Coming direct to CTC from a run at New York’s 59E59 Theatre, Milligan follows the CTC performance with a month long engagement of MERCY KILLERS at the Edinburgh Festival Fringe.

Milligan has appeared on Broadway in August: Osage County, La Bete, and Jerusalem.  He received his training from Juilliard where he won the John Houseman Prize for excellence in classical drama. His love of Shakespeare has taken him around the world performing with the Royal Shakespeare Company, Shakespeare and Company, and the Utah, Alabama, Illinois and Colorado Shakespeare Festivals. He has appeared at many of the nation’s top regional theaters including the Guthrie, The McCarter Theater, and Folger Theatre in Washington D.C.

Elaine Bromka in TEA FOR THREE

TEA FOR THREE, a gallery of touching, often funny portraits of three dynamic women, will be presented on Wednesday, July 24 at 8:00pm. The play comes to CTC direct from an Off Broadway run to rave reviews for actress Elaine Bromka, particularly from The New York Times. Jeffrey Borak of The Berkshire Eagle reviewing the original CTC production wrote “Elaine Bromka’s portrait of Pat Nixon is expertly crafted, wrenching, sad, and haunting.” The Republican (Springfield) greeted the CTC transfer to City Stage in Springfield with “this play is polished, effective, precise, amusing and touching.”

TEA FOR THREE is based on a longstanding White House tradition – each First Lady prepares a tea for her successor. Playwright Eric Weinberger used this tradition as a springboard to uncover a unique perspective – the one held by the wife and partner of the Most Powerful Man in the World.

According to CTC Artistic Director Byam Stevens, who directed the original CTC production and the New York remount, “The audience comes upon each of these remarkable ladies at a threshold moment in their lives, when years of sacrifice have come to an end and they have to face new challenges. At this pivotal life moment, they share with us not only their triumphs and tragedies, but also surprising, sometimes very funny, revelations about their personal lives.”

TEA FOR THREE was born when comedian/impressionist Rich Little chose Ms. Bromka to play eight First Ladies opposite him for the PBS production of The Presidents. She became fascinated with three of them, Lady Bird Johnson, Pat Nixon and Betty Ford, and approached Drama Desk Award nominated playwright Eric H. Weinberger to collaborate on a one-woman show about the great adventure that Pat Nixon called “the hardest unpaid job in the world.”

Ms. Bromka has appeared on Broadway in The Rose Tattoo, I’m Not Rappaport and Macbeth,and off-Broadway in Cloud 9, Inadmissible Evidence with Nicol Williamson, the world premiere of Michael Weller’s Split and Candide with the National Theatre of the Deaf.  Her regional credits include: Long Wharf, Hartford Stage, Actors Theatre of Louisville, ACT/Seattle, and Shakespeare and Company.

TEA FOR THREE is the third CTC production to transfer Off Broadway in five years, (following The Bully Pulpit and The Dishwashers) and fifth transfer in six years (Last Train to Nibroc to Peterborough Players and Pride@Prejudice to Capital Repertory Company).

JANE EYRE: A MEMORY, A FEVER, A DREAM

JANE EYRE: A MEMORY, A FEVER, A DREAM, the latest work from playwright Daniel Elihu Kramer, author of CTC’s smash hit production Pride@Prejudice, will be presented as a free staged reading at 5:00pm on Thursday, July 25. Kramer’s exciting new adaptation of Charlotte Bronte’s classic romance, to be directed by the playwright, will feature CTC favorites Allison McLemore (The Nibroc Trilogy, Turn of the Screw), James Barry (Arms on Fire, Wittenberg), and Kim Stauffer (Crime and Punishment).

The performance will be followed by CTC’s 3rd Annual DRAMA FOR DINNER Event, this year to be held at Wyld Thyme Restaurant in Chester, featuring CTC Artistic Director Byam Stevens, playwright Daniel Elihu Kramer, and the cast of JANE EYRE as table hosts. The evening will begin with an artist reception followed by a multi-course dinner, complete with wine. DRAMA FOR DINNER participants will receive premium reserved seating for the JANE EYRE reading.

Chester Theatre Company, a professional theatre company located in the foothills of the Berkshires, produces 4 plays each summer, performed by top-flight actors, directors and designers from across the country. Under the leadership of Artistic Director Byam Stevens, CTC has earned a reputation for producing the best in contemporary theatre — 17 CTC productions have gone on to Off Broadway, regional, national, and international engagements in the last 16 years. For further information go to CTC’s website, www.chestertheatre.org.

CTC performances are supported, in part, by the Massachusetts Cultural Council and the Local Cultural Councils of Blandford, Chester, Montgomery, Russell, Otis, Washington, and Worthington