We woke to a wonderfully sunny first full day in Chicago. After breakfast in the South Water Kitchen, we gathered to hear from Steve Oxman, Chicago theatre critic for Variety. He gave a marvelous talk, ranging from the origins of Chicago theatre to the contemporary Chicago theatre scene. Steve talked especially about the companies whose work we’ll be seeing this week (Steppenwolf, the Goodman, Lookingglass, and Victory Gardens). We learned that many of these companies began as acting ensembles, created by the actors themselves, and how those companies have grown over the years. 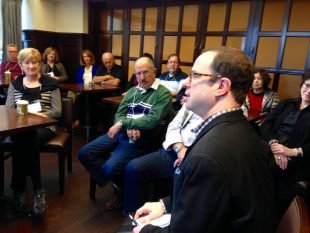 Steve Oxman offering us an introduction to Chicago theatre.

Steve talked as well about the influence of Chicago productions on the national theatre scene, discussing productions such as August: Osage County from Steppenwolf, and Disgraced, which originated at the American Theatre Company here, went to Broadway, won the Pulitzer for drama, and which we’ll be seeing Thursday at the Goodman Theatre (directed by Kimberly Senior, a Chicago director). He told us also about the process of Chicago-based director Mary Zimmerman, whose adaptation of Treasure Island we’ll be seeing Friday at Lookingglass Theatre.

Steve talked as well about other productions currently playing in Chicago, for those of us looking to see additional plays. He left time for questions from our theatre-goers, which led to more terrific conversation and insights. Everyone agreed that Steve had started us off perfectly. His range of knowledge, his inside view of the Chicago theatre scene, and his pure enthusiasm left us all eager to get to the theatre!

It was another sunny day, and everyone headed out to enjoy the city. Some have family or friends in the area, and used the day to reconnect, while taking advantage of the beautiful weather. Millennium Park was bustling on this gorgeous day. One of the centerpieces of the park is Cloud Gate, a remarkable piece of public sculpture by the Indian-born British artist Anish Kapoor. Constructed between 2004 and 2006, the sculpture is nicknamed The Bean because of its shape. Made up of 168 stainless steel lates welded together, its highly polished reflective exterior has no visible seams. 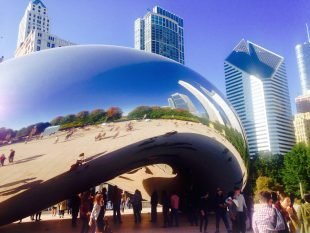 Kapoor’s design was inspired by liquid mercury, and the sculpture’s surface reflects and distorts the city’s skyline. Visitors are able to walk around and under Cloud Gate’s 12-foot high arch. On the underside is the omphalos (Greek for “navel”), a concave chamber that warps and multiplies reflections. The sculpture has become a major destination for visitors to Chicago, in part because of the endless picture taking opportunities it offers. On a sunny day like today, the sharpness of the buildings against the blue sky in reflection was striking.

In the evening, travelers gathered in groups for dinner, before heading to Steppenwolf in Lincoln Park, to see Frank Galati’s adaptation of John Steinbeck’s East of Eden.