We began our first full day in Chicago with a talk from Steven Oxman. Steven is the Chicago theatre critic for Variety, and has worked and reviewed in Chicago for about the last ten years, after writing for Variety in Los Angeles for a number of years. Steven shared with us both a broad view of the Chicago theatre scene and tradition, and inside information on the theatres, artists, and plays we’ll be seeing this week. Chicago’s theatre developed largely from acting ensembles, and from store-front theatres. Some, like Steppenwolf and Lookingglass, have grown to be large institutions. Others on our schedule, like Steep and TimeLine, are still small and intimate companies and spaces.

Steven discussed each of the companies, as well as the three out of four plays he has already seen. He also shared some insider’s suggestions for additional plays our tour-goers might enjoy during their time here (along with a few special restaurant recommendations). It was a terrific talk, and we all left energized to start our day! 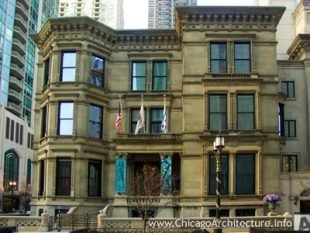 Some in our party went to visit the Driehaus Museum, one of the grandest residential buildings of 19th-century Chicago, the Gilded Age home of banker Samuel Mayo Nickerson. Richard H. Driehaus founded the museum on April 1, 2003 with a vision to influence today’s built environment by preserving and promoting architecture and design of the past.

The mansion is stunningly restored, and furnished with a broad range of astonishing period furniture, art, and decorations. Many more in our party plan to visit the Driehaus tomorrow, as it is quite near Lookingglass Theatre, where we’ll be going tomorrow to see Aaron Posner’s Life Sucks.

At the end of the day, we all met at Steppenwolf Theatre to see the World Premiere of David Rabe’s play Visiting Edna. The play stars Tony winner Debra Monk, and is directed by Steppenwolf’s new Artistic Director Anna D. Shapiro, herself a Tony winner for her direction of August: Osage County, which came to Broadway from Steppenwolf. David Rabe has been an important name in the American theatre scene since his plays of the 1970’s about the effects in America of the war in Vietnam (including the Tony Award winning Sticks and Bones). The play has many fascinating elements–combining realism with highly theatrical choices–and we came out looking forward to the next morning’s conversation!