After another terrific breakfast, we gathered in our room in the South Water Kitchen to discuss the previous night’s performance of East of Eden at Steppenwolf Theatre. The script was adapted by Frank Galati–a long time Steppenwolf ensemble member, and the adapter/director of the company’s storied production of Steinbeck’s The Grapes of Wrath. The production was directed by Terry Kinney–a Steppenwolf co-founder. One interesting question we found ourselves pursuing in our discussion was what part of what we saw was attributable to the adapter, and what part to the director. We also addressed the question of how to untangle the work of the director from that of the actors. 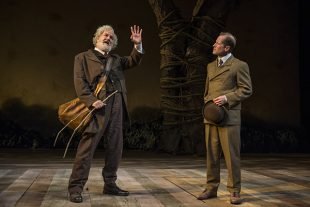 Steinbeck’s novel covers generations, and moves around through multiple locations. Steppenwolf is a theatre with impressive physical resources, and we saw them employed in the set. Beyond the presence of a large tree–split and then bound together–in this play that references the Garden of Eden so heavily, it seemed to many of us that the director and designers had focused heavily on the stage mechanism necessary to accomplish that range–making heavy use of a trap with a hydraulic lift, as well as stage wagons that came and went. There was generally great clarity regarding where we were, what exactly was happening, etc.

Much of the acting work appeared primarily to be in service of the same goal: making clear what was happening. While this allowed the events of Steinbeck’s story to come through clearly, the performances often seemed to keep the audience at a distance from the emotional life of the characters within that story. We talked extensively about the act of adaptation–and its goals on stage. Some among us had read the novel long ago, some never, and one recently. In this case, each group had remarkably similar experiences. On Friday, we’ll have the chance to see another adaptation–Mary Zimmerman’s Treasure Island at Lookingglass Theatre, which should provide fascinating opportunities to extend our discussion of the craft. 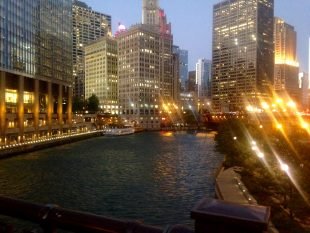 Evening on the Riverway

Following our Talkback, many headed out for shorter excursions–to attend some of the many museums beyond the Art Institute (such as the Driehaus Museum), and to visit the farmer’s market on Daly Plaza (with its unlikely blue water fountain). Then we met up again at the Goodman Theatre for the matinee performance of Ayad Akhtar’s Pulitzer prize winning play Disgraced. This is a play that began its life in Chicago, then moved to New York, and has returned now, each time under the direction of Kimberly Senior.

In the evening, groups went off for special dinners, to attend The Marriage of Figaro at the Chicago Lyric Opera, to see Arthur Miller’s The Price at Timeline Theatre, and to enjoy the city in the evening.