Following another terrific breakfast here at the Hotel Monaco, we gathered in our room at South Water Kitchen for our first true Talkback of the tour. There was so much to discuss and share regarding the previous night’s performance of David Rabe’s Visiting Edna at Steppenwolf Theatre. We began (as we often do) by discussing the set itself, which mixed extensive realistic elements with more overtly theatrical touches. From our front row of the balcony, for instance, we looked through exterior apartment windows, in to a cloud-filled sky. Below that, however, was a largely realistic, wide apartment, though with one character’s bedroom wall removed. 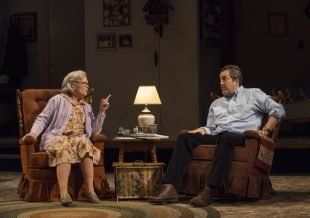 The play follows an adult mother and son, when the son visits the mother who is likely dying of cancer. The scenes between them transpire realistically. However, the play began with an actress entering and explaining that she would be playing TV, and then pondering how she might go about this task. Next, another actor entered and introduced himself as Cancer. When Debra Monk, as Edna, entered, Cancer introduced her chillingly as his “host.”

Our conversation ranged broadly, covering both the mix of elements in the play, and the relationship between the mother and the son. The play is certainly autobiographical in some ways, and explored the distances that can appear even between two people who love each other, as these two characters certainly did.

While there are moments of the play that we suspect are prepared for some revision, or even cutting, it was in other ways a remarkable evening. Debra Monk’s performance was noteworthy, and some among us were particularly taken by the power of Cancer as a character–one with whom it might even be possible to empathize. It won’t be at all surprising if this play, perhaps this production, makes its way to New York , and we will be curious to see what form it takes there.

In the afternoon, we went to Lookingglass Theatre to see Aaron Posner’s play Life Sucks. Lookingglass Theatre is fascinatingly set in the old Waterworks building on Chicago’s Miracle Mile. The play is based on Anton Chekhov’s Uncle Vanya, but is at the same time its own play. (More on that in tomorrow’s discussion!)

In the evening some tour-goers went to the Goodman Theatre to see a revival of Wonderful Town (lyrics by Comden and Green and music by Bernstein), directed by noted Chicago theatre artist Mary Zimmerman. Others went to Remy Bumppo (yes, that’s really the name of a theatre) to see Tom Stoppard’s adaptation of Luigi Pirandello’s Henry IV. Another went to the Chicago Symphony Orchestra, with a performance of Shostakovich’s 10th Symphony, as well as Beethoven’s First Piano Concerto, featuring Emmanuel Ax.