On our sixth and final day, we all gathered once more at South Water Kitchen. We had a lively discussion of the previous day’s performance of Sucker Punch at Victory Gardens Theatre. Sucker Punch was an exciting mix of elements: both a traditional boxing story, with its attendant upward striving, rivalries, etc., and an investigation of the connections between racial division and personal relationships. Set in a decrepit boxing gym in 1980’s Britain under Margaret Thatcher, the play was compelling in its issues, its dialogue, its performances, and–a rare on stage component–its boxing sequences. 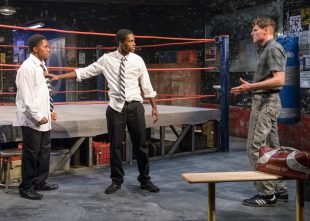 Interestingly, although the accents and some of the slang were unfamiliar to us, we felt entirely involved and brought into the world of the play. Our discussion included consideration of whether the play would have worked translated into an American context, or whether the particulars of the intended setting were key to the play. We observed as well that the power dynamics we saw between managers and boxers–which we might initially have ascribed to race–seemed by the end to reflect a broader and more complicated set of circumstances. Most moving to many was the sense that potentially deep friendships and relationships were sabotaged by the corroding effects of both personal and cultural prejudice.

Following our conversation about Sucker Punch, we reflected briefly on our full week in Chicago. It’s fascinating–and a treat–to experience how quickly a theatre tour group comes together. We begin the week as a mix of friends, acquaintances, and strangers. We end the week having enjoyed each others’ presence, having explored a range of theatrical and cultural experiences, and having shared our observations, responses, and thoughts through a week of conversations. 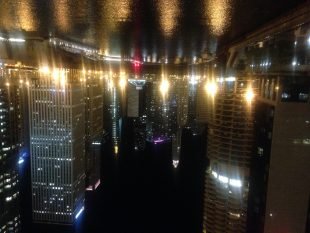 We said goodbyes to those traveling separately, then those of us flying back to Bradley Airport together got onto our charter bus to Midway. Everyone agreed that our first Chicago Theatre Tour had been a success. We had only begun to get to know the city, and many looked forward to coming again in the near future. (Maybe next year?)