Our day started a great deal sunnier than Thursday, when Chicago had done its best to earn the name “The Windy City.” We gathered again in our private room to discuss the previous afternoon’s performance of Life Sucks at Lookingglass Theatre. The play, by Aaron Posner, is based on Anton Chekhov’s Uncle Vanya. A few of us had been together last March on the London Tour, where we saw a stunning production of Uncle Vanya at the Almeida Theatre, and others in the group had seen Vanya in other settings. 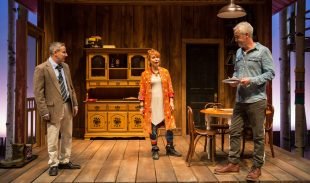 Those who had arrived at Lookingglass expecting the cliché of depressing Chekhov had our expectations upended almost immediately, as the play began with the cast running onto the stage, making announcements about cell phones and unwrapping of candies, and announcing/debating the topic and themes of the play.

Many of the characters were drawn from Uncle Vanya, some more fully reinvented than others. There was a great deal of humor in the play–along with no shortage of Yiddish–and a surprising amount of interaction with the audience. We had a terrific conversation about what makes audience interaction work (as it did in this production) or sometimes not work. The actors seemed truly to want to hear what the audience said, and to listen with great care. Their faith was rewarded more than once by fascinating responses. The play and the production gave us plenty to talk about, and offered a surprisingly optimistic–though realistic–look at what we felt was the central question of the play: Does life suck?

After the play yesterday, many of the cast members were in the lobby, and some in our party had conversations with them that informed our conversation in the morning. (Interestingly, some of us discovered that the actress playing Sonya had been wearing padding and prosthetics, and looked quite different in reality.) 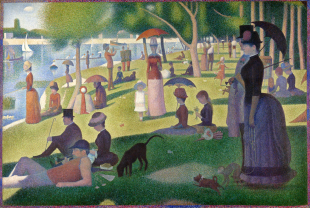 A Sunday Afternoon on the Island of La Grande Jatte

Following our morning conversation, we had the day free until we went to see Bobbie Clearly at Steep Theatre in the evening. Some used the time to visit the Art Institute of Chicago, one of the country’s great museums. The collections there could easily hold a visitor for more than a day, and offer a rare breadth of holdings, including such iconic works as iconic works such as Georges Seurat’s A Sunday on La Grande Jatte — 1884, Pablo Picasso’s The Old Guitarist, Edward Hopper’s Nighthawks, and Grant Wood’s American Gothic.

In the evening we all met at Steep Theatre, a storefront company with seating for 65, to see the world premiere of Bobbie Clearly, by Alex Lubischer.