The group met again at South Water Kitchen for a spirited conversation about last night’s performance of Treasure Island, at Lookingglass Theatre. The production was full of wonderful visuals and physical moments, as well as music–traditional English sea shanties and folk songs, marvelously performed. We were especially taken by a remarkable moment when the entire performance deck was swung back and forth, as a ship heading out on the seas.

At the same time, many of us remarked on how difficult it was to understand what was being said, most particularly by the boy playing young Jim Hawkins. The problem was widespread enough that it led us to discussion of the director’s role in paying attention to the issue. We talked about a director’s attention, and how many issues she must give it to within a production. 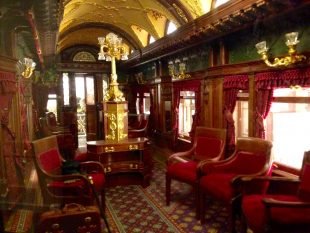 Is this the interior of a fully preserved Pullman Car?

After the conversation, we had a few hours before the matinee performance of Roy Williams’s Sucker Punch. We scattered again across this terrific city, to Lincoln Park and the Conservatory, to the Architectural Open Houses being held this weekend, and in many cases back to the Art Institute, to continue taking in that magnificent collection. Of particular interest to some were the Thorne Miniature Rooms.

These 68 miniature rooms were conceived by Mrs. James Ward Thorne of Chicago and constructed between 1932 and 1940 by master craftsmen according to her specifications. 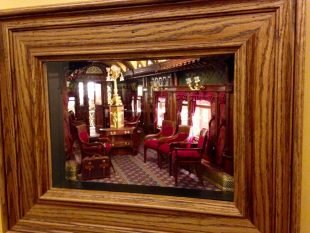 Now step back and see the frame around this remarkable miniature.

Painstakingly constructed on a scale of one inch to one foot, they allow a visitor to glimpse elements of European interiors from the late 13th century to the 1930s and American furnishings from the 17th century to the 1930s. While there are many more famous holdings at the Art Institute, the Thorne Rooms most certainly reward time spent with them.

We all met up again at the Victory Gardens Biograph Theatre. In addition to being the home of Victory Gardens Theatre company, the Biograph holds historical significance as the place where John Dillinger was shot and killed in 1934 (following a showing of the film Little Miss Marker). 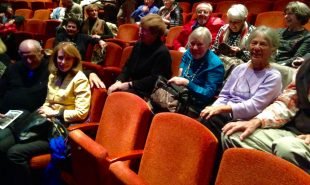 You can never have too many Talkbacks!

We’ve been fortunate on this trip that three of the performances we’ve attended had post-performance discussions, including Sucker Punch. Many of our group remained for the conversation, and we look forward to discussing the show further at tomorrow’s last Talkback!