We gathered Saturday morning for our discussion of Bobbie Clearly, which we saw Friday night at Steep Theatre. The play begins with what feel like documentary interviews with residents of Milton, Nebraska. It’s clear early on that something happened there “in the cornfields,” but for a while we’re not sure what. Eventually, we learn that a girl was murdered there, and the play explores both how the town copes with that loss, and eventually with the return of the young man who did the killing.

The play contains a lot of direct address, and we had been fascinated and impressed by how the actors at our previous play, Life Sucks, spoke with the audience. Here, many in our group felt less certain how the production wanted us to perceive this address. Were they actually speaking to us? Were we witnesses while they spoke to someone else? The play also included two talent shows and a karaoke performance, which raised some of the same questions. By the end of the play, events spiral out of control, as the town–and Bobbie, the killer–find themselves unable to make the new situation work. 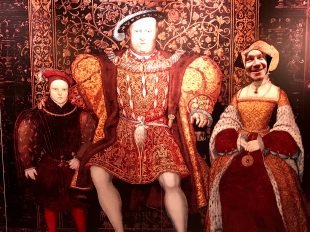 The day was beautiful, and we were free to enjoy the city until our 4pm performance of The Last Wife at Timeline Theatre. Timeline is a company committed to plays that engage with history, and this American premiere follows Catherine Parr, the sixth and last wife–and widow–of King Henry VIII. In a contemporary setting, with largely contemporary language, the play sets out to imagine Catherine’s journey as a woman seeking power in the face of the embodiment of patriarchy and its power. The cast was very engaging, and–in our discussions the next morning–we explored the fascinating questions raised by the play. We wondered as well whether the plays explicitness regarding its agenda sometimes worked against its greatest potential power and insight. 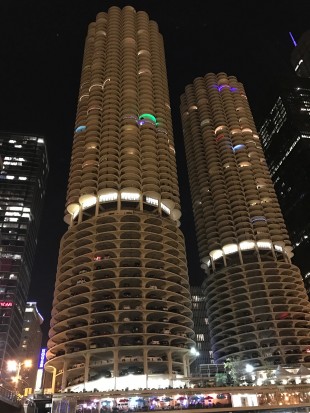 Chicago was a treat that night, as the Cubs clinched the National League pennant, and many of us went out for dinners and to enjoy the evening. The Hotel Monaco, where we stayed, is located just off the river, and the views were spectacular walking across the bridge. Sunday morning we met for a last discussion, of The Last Wife, then headed home. Our private bus took many of us back to the airport for our trip to Bradley. It was a week we will remember for a long time. As one of our tour-goers said, “After this trip, I’ll never look at theatre the same way.”

Our next big trip will be London from March 11-19. (Two spaces just opened up on the trip, which was previously full. Contact us as soon as possible if you want to join.) And we’re already thinking about plans for next fall’s theatre tour. Perhaps Washington, DC?