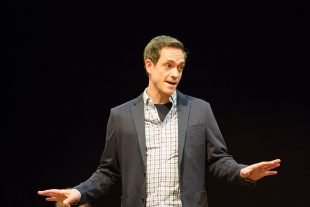 Joel Ripka in Every Brilliant Thing.

“I loved seeing Joel’s beautiful work recognized,” stated Kramer. “It’s also fitting that we won the Outstanding New Play award for a production that depended on our audience. They are what make Chester Theatre Company special. We’re proud to be a vital part of this flourishing theatre community.”
CTC received two additional nominations at the second annual event. I and You (by Lauren Gunderson) was also nominated in the category of Outstanding New Play or Musical, and Skeleton Crew (by Dominique Morisseau, and starring Ami Brabson, Christian Henley, Margaret Odette, and Daniel Morgan Shelley, and directed by Awoye Timpo) received a nomination for Outstanding Ensemble Production.

The awards were presented November 6 on the St. Germain Stage in the Sydelle and Lee Blatt Performing Arts Center at Barrington Stage in Pittsfield, MA.

Every Brilliant Thing will be restaged at Peterborough Players February 1-11, 2018. Joel Ripka will be reprising his award-winning role and Daniel Elihu Kramer will once again be directing the heartwarming play that received raves from audiences and critics alike. The Valley Advocate wrote, “…such a fresh and inventive approach to audience involvement that Ripka and director Daniel Elihu Kramer not only earn our willing participation, they create a tangible sense of common endeavor, even community. And that’s something worth living for.” For more information on purchasing tickets, visit www.peterboroughplayers.org