In the Public Theatre’s production of Julius Caesar, currently running as part of the theatre’s Free Shakespeare in the Park program, the title character bears a clearly intentional resemblance to Donald Trump. And, of course, because it’s Julius Caesar, this character who looks like President Trump is assassinated on stage, stabbed to death by senators

JULIUS CAESAR at the Public Theater

There’s been a great deal of controversy over this fact. Breitbart News was the first to make national news of the production, on June 6, under the headline “‘Trump’ Stabbed to Death in Central Park Performance of ‘Julius Caesar.'” The article quoted an audience member (also an employee of a conservative media outlet) who said on Joe Piscopo’s radio show, “I don’t love President Trump, but he’s the president. You can’t assassinate him on a stage,” and “If this had happened to any other president — even as recently as Barack Obama or George W. Bush — it would not have flown. People would have been horrified.”

The article also apparently prompted the New York Times to review the production ahead of its agreed upon schedule, before the press opening date, much to the displeasure of Public Theater Artistic Director Oskar Eustis.

The publicity from Breitbart, the New York Times, and other sources led to a range of online and published protests against the production. In response, Delta Air Lines and Bank of America withdrew funding from the Public Theatre, while American Express distanced itself from the production, making clear that it does not fund Shakespeare in the Park.

With the proviso that my legal training is limited to the four days I spent in law school (don’t ask), I’ll bet that the first amendment protects the Public Theater’s choice. Freedom of speech has long been adjudicated to cover images and performances, as well as written or spoken statements.

Here’s where I think things get interesting. Have you read Julius Caesar? The whole assassination thing doesn’t work out well. For fear that Caesar’s ambition will destroy the Roman Republic, a group of senators assassinate him, swaying the “noble Brutus” to join them in their plot.

The result of their act is, in fact, the destruction of the Republic. Also, pretty much everyone involved in the assassination regrets it, and is killed. The Public Theater has posted a note on their website, saying “Our production of Julius Caesar in no way advocates violence towards anyone. Shakespeare’s play, and our production, make the opposite point: those who attempt to defend democracy by undemocratic means pay a terrible price and destroy the very thing they are fighting to save.”

Companies have a right to support, or not support, whatever work they choose. As Oskar Eustis told the New York Times, “It’s their money, they’re supporting us, they get to decide what to do with it.” Corporations support the arts for some mix of commercial and philanthropic purposes, but they surely do not want to work against their own financial interests.

This is an interesting one. Remember that quote from above: “If this had happened to any other president — even as recently as Barack Obama or George W. Bush — it would not have flown”? It turns out we can test this assertion. 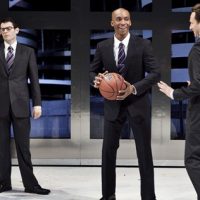 JULIUS CAESAR at the Guthrie Theatre in 2012

In 2012, the Guthrie Theatre mounted a production of Julius Caesar with a tall, thin, African-American, basketball playing Caesar. And of course, that character who looked like President Obama was assassinated on stage. The production (directed by Rob Melrose for The Acting Company) was subsequently presented in New York as well, where the New York Times made it a Critic’s Pick.

Among the Guthrie’s sponsors that year was Delta Air Lines. There is no record of protest by Delta over that production. And, there was no push by media outlets of any political stripe against the portrayal of the assassination of this version of Julius Caesar as current president.

Here at Chester Theatre Company, we believe in conversations. We commit ourselves to creating productions that provoke important discussions, that challenge our thinking, that open us up to new perspectives. I haven’t seen this production of Julius Caesar, but it sounds like it’s doing that work, while also providing a testament to Shakespeare’s power to unsettle us, all these centuries later.